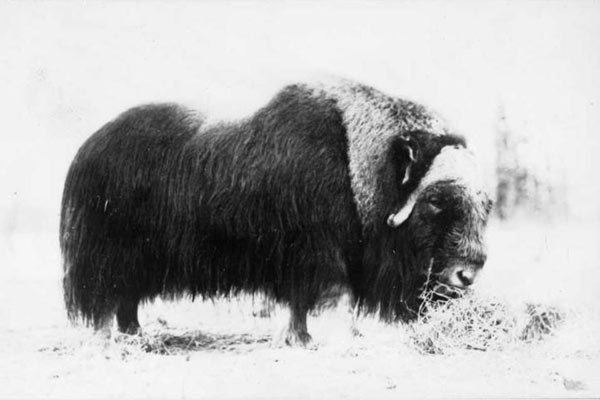 A profile shot of a muskox with a detailed view of its face and hair. These stocky animals are found in Alaska and other northern regions. They have short legs and long shaggy, brown and black coats; their horns are broad and flat and curve at the tips. From the Doris Stephan Photograph Collection.

Ancestral muskoxen crossed the Bering Land Bridge to North America more than 120,000 years ago, but the modern animals went extinct in Alaska sometime in the 1800s. They started a comeback at the Alaska Agricultural College and School of Mines.

At the urging of Fairbanks resident Irving Reed, an Alaska Game Commission member, wildlife officials in 1930 secured $40,000 from Congress to buy 34 yearlings and calves from muskox herds in Greenland. These large relatives of sheep and goats, which have curved horns and a shaggy coat, traveled 14,000 miles by boat to a cooperative research station on campus. The station was a partnership between the federal Bureau of Biological Survey and the college, which later became the University of Alaska Fairbanks.

The muskoxen did well in Fairbanks. They matured, bred and provided ample opportunity for researchers to experiment with making products from the animals' fur undercoat. The wool, called qiviut, is highly prized for its softness, warmth and durability.

In 1936, the remaining herd of 31 university muskoxen were moved to the predator-free Nunivak Island in the Bering Sea off Alaska's southwest coast. Today, Alaska has about 4,500 muskoxen, all descended from the original 34. Descendants of the original herd as well as muskoxen from Canada were also relocated to Russia's Arctic.

Muskoxen remain a popular Fairbanks attraction at UAF’s Large Animal Research Station, where scientists research muskox physiology, nutrition and husbandry. LARS sits on pasture land where the 34 muskoxen had once roamed in 1930.