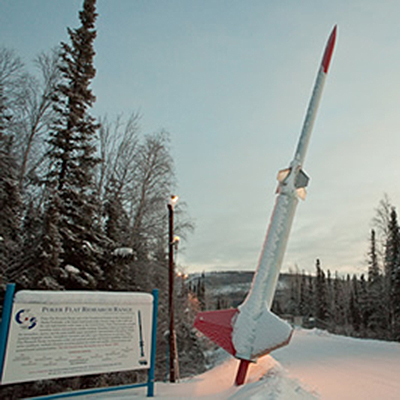 Poker Flat Research Range is located approximately 30 miles north of Fairbanks on the Steese Highway. It’s operated by the Geophysical Institute under contract to NASA’s Wallops Flight Facility, which is part of the Goddard Space Flight Center. In addition to launching sounding rockets, Poker Flat is home to many scientific instruments designed to study the arctic atmosphere and ionosphere. Poker Flat is the world's only scientific rocket launching facility owned by a university.

In 1968, the Geophysical Institute secured a contract to launch military research rockets. But it had no range from which to do so. Under the leadership of assistant director Neil Davis, the institute staff built the Poker Flat facility by March 1969, when the first launch occurred. Poker Flat has operated ever since; as of March 2019, it had launched 342 major sounding rockets and about 1,800 meteorological rockets in its 50-year history.