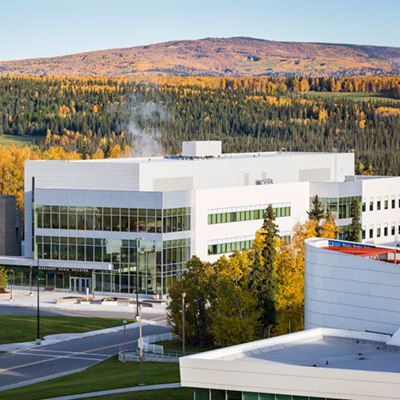 Groundbreaking on the Margaret Murie Building was held March 30, 2011. The facility was completed July 15, 2013, and the ribbon-cutting and dedication was held Aug. 22, 2013. The facility has nearly 100,000 square feet of state-of-the-art laboratories, classrooms and office space, as well as a 150-seat auditorium. The building serves as a central home for the Department of Biology and Wildlife and supports research and teaching in biology, physiology and infectious diseases.

Margaret “Mardy” Murie was the first woman graduate of the Alaska Agricultural College and School of Mines, which eventually became the University of Alaska Fairbanks. She married acclaimed biologist Olaus Murie immediately after graduating in June 1924. Together, they traveled Alaska by boat and dog team, studying the state’s wildlife. Her book, “Two in the Far North,” chronicles that early life in Alaska and later visits after the couple moved to Moose, Wyoming.

Murie’s career as a naturalist and author spanned decades and earned her recognition as a founder of the conservation movement in the United States. The Muries were instrumental in the creation of the Arctic National Wildlife Refuge in 1960 and passage of the 1964 Wilderness Act. In 1998, President Clinton awarded Margaret Murie the Presidential Medal of Freedom, the country’s highest civilian honor. She also received awards from numerous conservation groups. She died in 2003 at the age of 101.