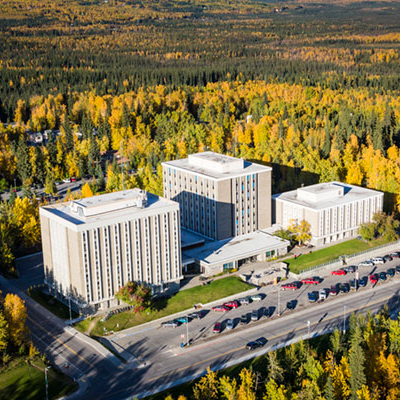 •    Terris Moore Hall opened in 1966. The eight-story coed residence hall is the westernmost building of the MBS complex. Dedicated to former UA President Terris Moore in 1968, Moore Hall can house up to 320 students. The main floor of Moore Hall contains two lounges, a classroom and a kitchen area.

Terris Moore was the second president of the University of Alaska, serving from 1949 to 1953. Moore, with Sydney Chapman’s help, assembled a distinguished research staff at the Geophysical Institute and established the first formal graduate study at the university. He was granted emeritus status in 1972.

•    E.L. Bartlett Hall is the central building of the residential complex. The eight-story building opened in 1969. Bartlett Hall has capacity for up to 322 students in single and double occupancy rooms, with a lounge on each floor and a large lounge on the ground floor.

E.L. Bartlett, known as Bob, was born in Seattle, Washington, on April 20, 1904. He lived in Fairbanks from 1905 to 1933 and attended the Alaska Agricultural College and School of Mines and the University of Washington. Bartlett was named congressional secretary to Anthony J. Dimond, his close friend who had been elected Alaska's delegate to Congress in 1933. He succeeded Dimond and began the first of seven consecutive terms as Alaska's delegate to Congress. When statehood was granted to Alaska, something he was instrumental in making happen, Bartlett was elected U.S. senator and served in that post until his death.

•     Ivar Skarland Hall opened in 1964 as the "new women's dorm," to accommodate about 140 students in double and single rooms. The four-story hall was converted to coed in 1975. Renovations were completed in fall 2011. Skarland has lounges on the second and fourth floors, a laundry room on the third floor and a large study hall on the ground floor.

Ivar Skarland, an immigrant from Norway, earned a bachelor's degree in anthropology from UA in 1935, then earned master's and doctoral degrees from Harvard. He returned to Fairbanks and taught from 1940 until his death in 1965. First as a student and later as a faculty member, he led development of the Nordic skiing trails that today lace North Campus.

Harriet Belle moved to Fairbanks in 1907, where she was principal of the high school from 1907 to 1910. She married Luther Hess in 1911. She was elected secretary of the Board of Trustees of the Alaska Agricultural College and School of Mines upon its founding in 1917. She remained on the board when it became the University of Alaska Board of Regents in 1935 and served until her death in 1951.

Luther Hess was licensed to practice law in Alaska in 1901 and served as assistant U.S. district attorney for the Fourth Judicial Division until 1905. Hess served in nine sessions of the Alaska Territorial Legislature.