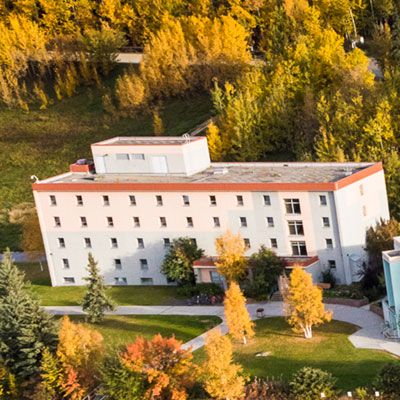 Austin E. Lathrop Residence Hall opened in 1962 as on-campus housing for 134 male students. For a number of years, Lathrop Hall was coed by floor. In 2007, Conference Services converted Lathrop Hall into accommodations for campus visitors who pay for their lodging. Funds generated were used to keep costs down for students living on campus. In 2009, Lathrop was once again designated as a residence hall.  In fall 2019, the hall became home to a variety of administrative departments, including several financial and planning offices, the development team and the K-12 outreach program.

Austin E. "Cap" Lathrop was born in 1865 in Michigan. Lathrop was, for a time, Alaska’s wealthiest resident. In 1924, his Alaska Moving Picture Corp. produced The Chechahcos, the first feature-length film shot entirely in Alaska.

He was named to the Alaska Agricultural College and School of Mines Board of Trustees in 1933. In 1935, when the college was renamed, the trustees board became the University of Alaska Board of Regents. Lathrop served until his death in 1950.