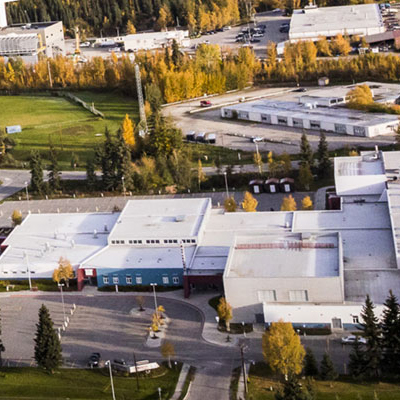 The Hutchison Institute of Technology opened in fall 2004 as a partnership between the Fairbanks North Star Borough School District and UAF's Community and Technical College. It is housed in the renovated Hutchison Career Center, which the school district first opened in 1973.

After the 2004 renovation, the school district opened Hutchison High School in the building as a stand-alone school with a vocational focus.

Classroom and lab space at “Hutch” for CTC associate degree and certificate programs includes areas for culinary arts, drafting technology, process technology and maintenance technology with emphasis areas in aviation and diesel/heavy equipment. A new multipurpose shop for process technology was added during the renovation. In 2013, most of the aviation maintenance program moved to a newly purchased hangar on the East Ramp of Fairbanks International Airport.

The building is named for James T. Hutchison, who was a master craftsman and worked as an aircraft mechanic for 40 years. Hutchison was recognized in 1972 as the Federal Aviation Administration’s Mechanic of the Year. He originally came to Alaska with the U.S. Army. In 1929, he began his aircraft maintenance and repair career by working for Carl Ben Eielson’s Alaska Airways, where he learned how to work on a variety of aircraft and earned a reputation for meticulous work, often forging new parts or adapting replacements.