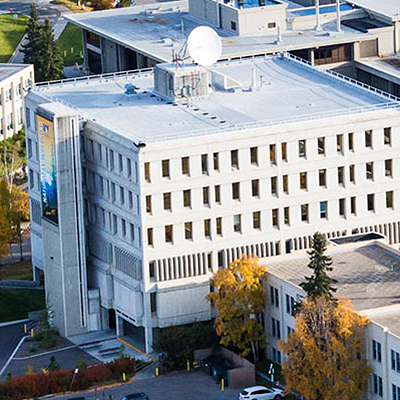 The Ernest Gruening Building, dedicated in May 1972, is an eight-story, 72,000-square-foot structure. It was designed in the Brutalist architectural style, also used for the FBI office building in Washington, D.C., and Boston City Hall.

The Gruening Building houses many departments in the College of Liberal Arts, the School of Education and academic advising.

Ernest Gruening was born in New York City in 1886. He graduated from Harvard Medical School in 1912 but never practiced medicine. He discovered a love for journalism and worked for the Boston American, the New York Tribune, The Nation and the New York Post. In 1934, President Roosevelt appointed Gruening as director of the Division of Territories and Island Possessions for the U.S. Department of the Interior.  Gruening first visited Alaska in 1936. In 1939, Roosevelt appointed Gruening territorial governor of Alaska. He served 14 years as governor and made statehood his personal campaign. He was elected to the U.S. Senate as one of Alaska's first two senators, a job he held for a decade. He died in 1974.