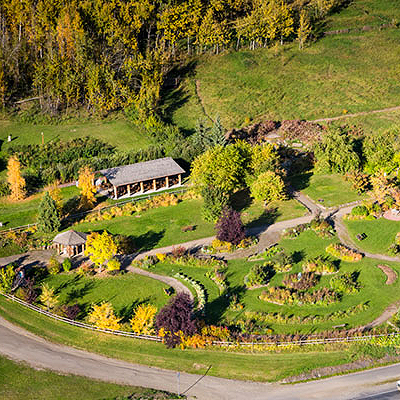 In 1991, the demonstration flower garden at the UAF Agricultural and Forestry Experiment Station became the Charles Georgeson Botanical Garden. The garden is a valuable source of information on suitable varieties of annual flowers and vegetables for commercial growers and home gardeners, and a major attraction for visitors. The garden's mission is to be a center for education and research in subarctic horticulture.

Charles Christian Georgeson established Alaska's system of agricultural experiment stations. A native of Denmark, he moved to the United States in 1873 to study at Michigan State University. There he earned one of the school's first doctorates. The Secretary of the Department of Agriculture instructed him, at age 47, to go to Alaska.

In 1898, Georgeson began his mission with his first station in Sitka, then Alaska's capital. In rapid succession, he opened experiment stations in Kenai, Rampart, Copper Center, Kodiak and Fairbanks. All were up and running by 1907. The seventh and final station, Matanuska, began operations in 1917.