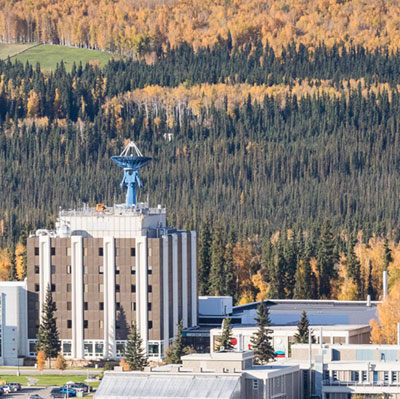 The seven-story C. T. Elvey Building, built in 1970, is home to the Geophysical Institute and contains office and lab spaces.

The blue satellite-tracking antenna, with a diameter of 29.5 feet, was hoisted atop the building in March 2017, replacing one from 1987. It and two 11-meter antennas in nearby woods receive synthetic aperture radar data from polar-orbiting satellites. UAF operates the Alaska Satellite Facility for NASA. A weather and gamma radiation monitor also sits atop Elvey, and another is in the hills nearby. They gather data for UAF, Los Alamos National Laboratory and the Alaska Department of Environmental Conservation.

Christian T. Elvey was managing director of the Geophysical Institute from 1952-1963 and was the university's first vice president for research and advanced study from 1961-1963. Upon his retirement in 1967, he was granted professor emeritus status. In 1970, Elvey joined the elite names in the history of world science when a crater near the north pole of the moon was named in his honor.