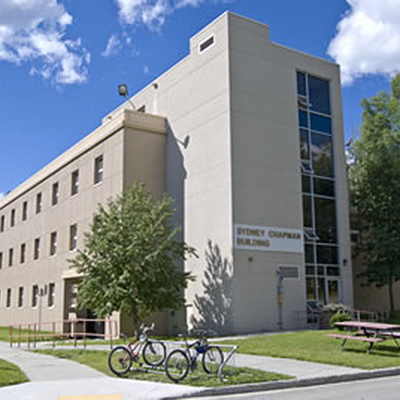 In 1948, Congress appropriated funds for construction of an earthquake-proof three-story building for the fledgling Geophysical Institute. Today, the Sydney Chapman Building houses department offices, classroom space and a computer lab. The 19,000-square-foot building boasts an observation deck of an additional 6,000 square feet. The penthouse of the building has six removable hatches in the roof, designed to aid in astronomical research, and once had an astrodome housing a 12-inch reflecting telescope. In June 1994, the dome and telescope were donated to the Fairbanks Astronomical Unit's astronomy group.

Sydney Chapman was a professor at the university’s Geophysical Institute from 1951 until 1970, when his title was advisory scientific director and professor of geophysics. In 1970, Chapman joined the elite names in the history of world science when a crater near the north pole of the moon was named in his honor.