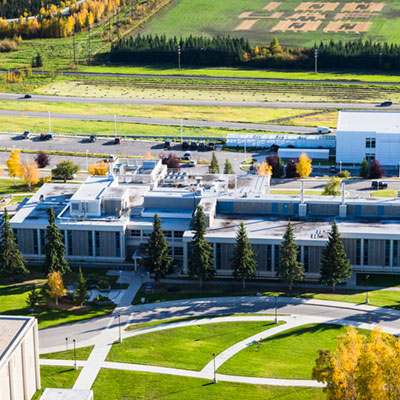 The Arctic Health Research Building was completed in 1973. Originally, it was to house the U.S. Public Health Service's Bureau of Disease Prevention and Environmental Control offices in Alaska. It became the headquarters location for UAF's natural resource management and agriculture school.

The building was renovated in June 2002 with funding from state and federal research grants to revitalize and improve UAF’s science laboratory space. This renovation created a state-of-the-art microbiology lab and a larger, more efficient lab support space, greatly enhancing research and academic programs.

The Agricultural and Forestry Experiment Station West Ridge Greenhouse abuts the south side of the building. It opened in November 2011 to replace the West Ridge Greenhouse, which was dismantled to erect the Murie Building. The greenhouse is primarily used by researchers with UAF's former resource management and agriculture school, which merged with the College of Natural Science and Mathematics in 2019. AFES and its greenhouse are now adminstratively located in the UAF Institute of Natural Resources, Agriculture and Extension.