Past Events and Initiatives 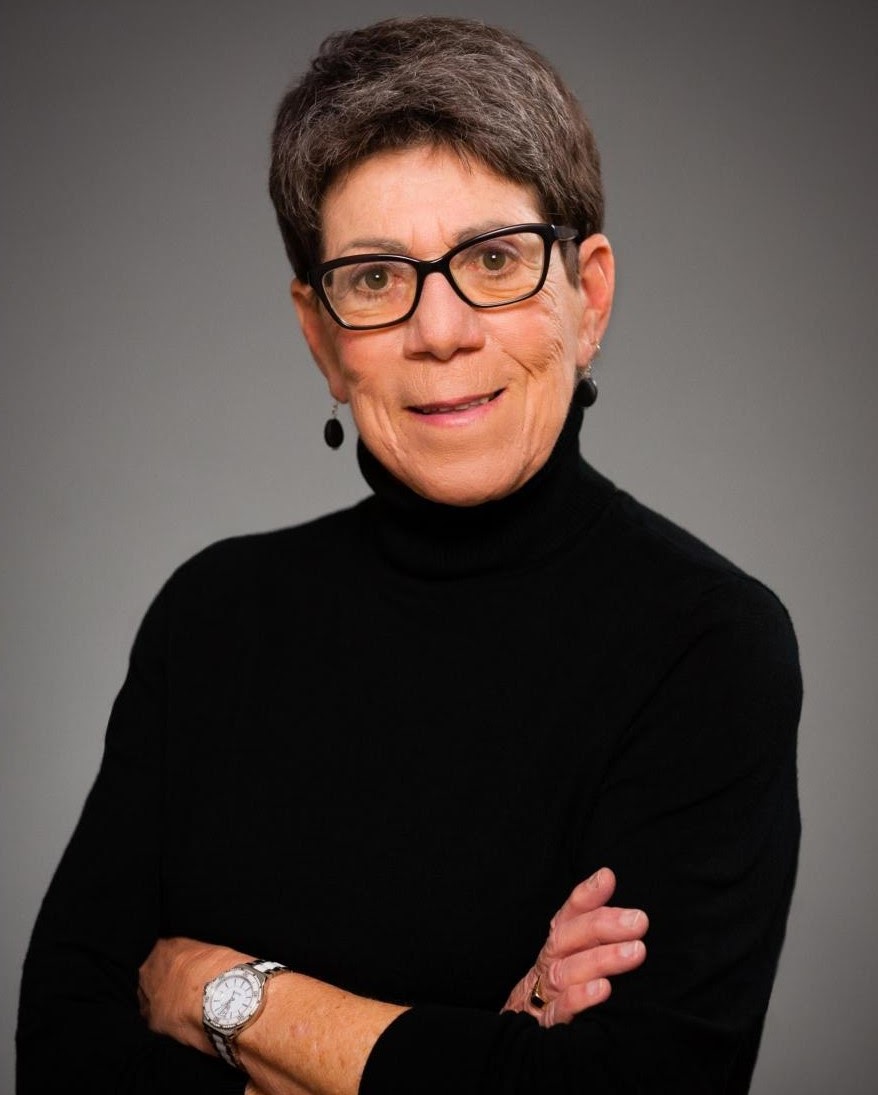 Lavender Graduation is an annual ceremony conducted on numerous campuses to honor lesbian, gay, bisexual, transgender, queer and ally students and to acknowledge their achievements and contributions to the University. The Lavender Graduation Ceremony was created by Dr. Ronni Sanlo, a Jewish Lesbian, who was denied the opportunity to attend the graduations of her biological children because of her sexual orientation. It was through this experience that she came to understand the pain felt by her students.

Congratulations to all of our LGBTQIA2+ graduates for your achievements! You are an inspiration to all members of the community!

We would also like to recognize all of LGBTQIA2+ graduates that for any reason could not join us in this celebration. In these uncertain times, some queer students may have returned to unsafe or unwelcoming environments. We honor you and your achievements in spite of adversity. 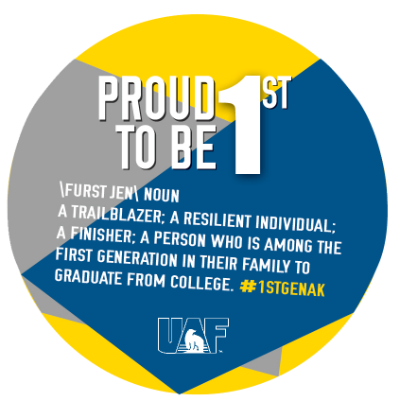 The First-Gen Forward Mentorship Program connects first-gen students with first-gen UAF faculty or staff who can help students navigate college. Through sharing experience and knowledge, mentors and mentees are encouraged to build lasting relationships. SSS and NDAC will offer a series of formal mentorship opportunities and mentors and mentees are encouraged to meet up outside of these activities as well. 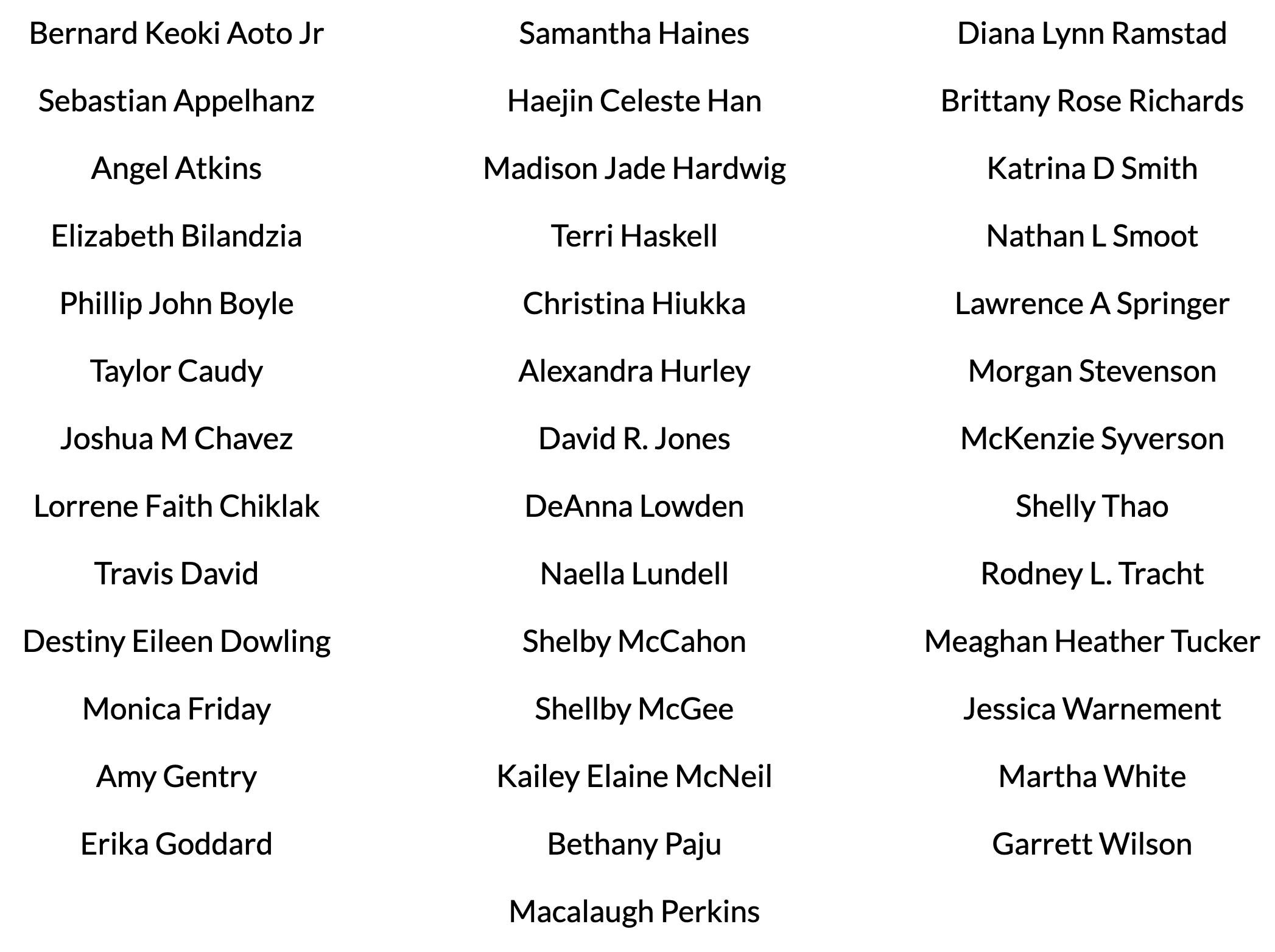 We proudly introduce our UAF Spring 2020 First-Generation Graduates. Please join us in celebrating their achievements! 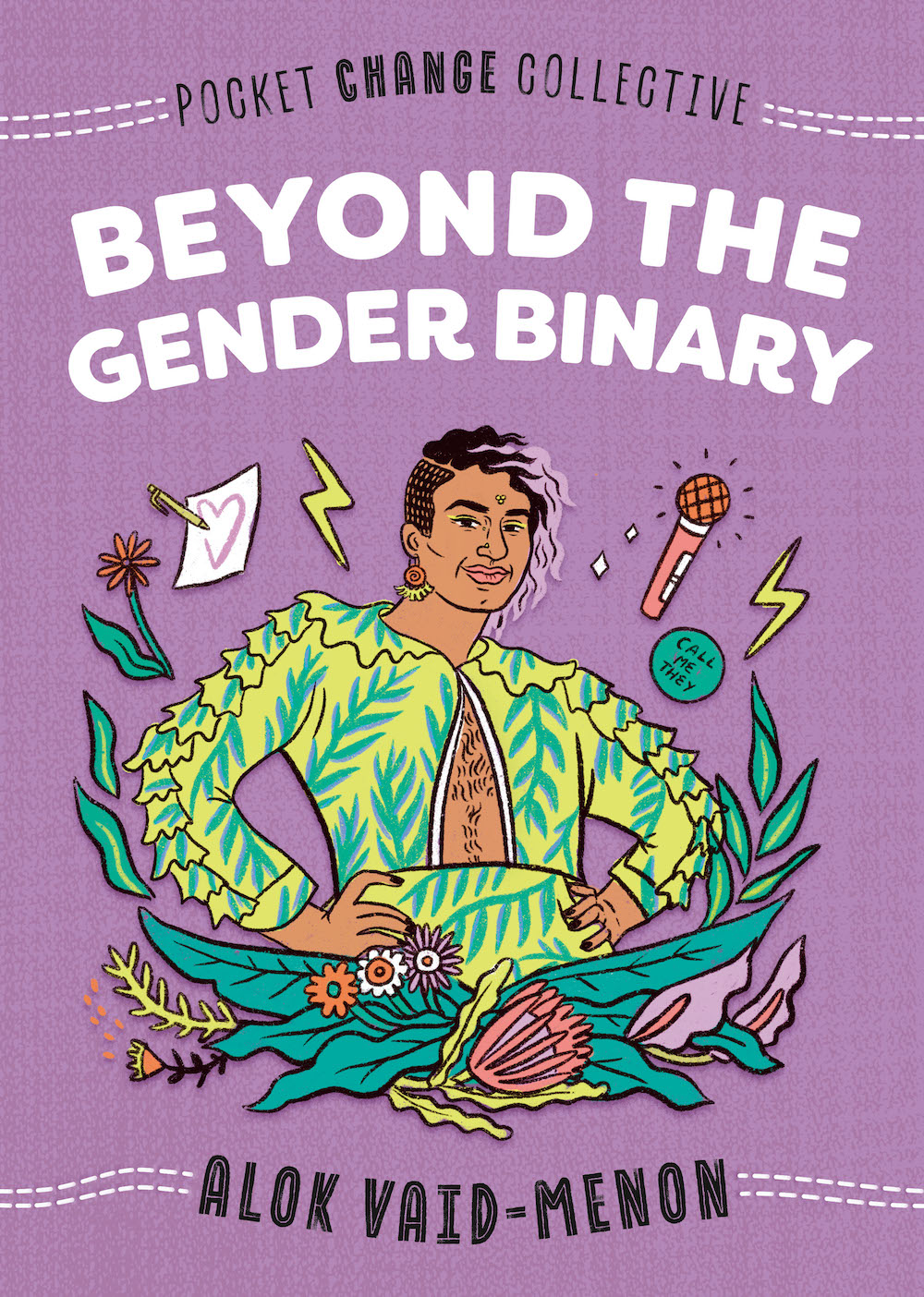 ALOK (they/them) is a gender non-conforming writer and performance artist. Their distinctive style and poetic challenge to the gender binary have been internationally renowned.

As a mixed-media artist Alok uses poetry, prose, comedy, performance, lecture, fashion design, and portraiture to explore themes of gender, race, trauma, belonging, and the human condition. They are the author of Femme in Public (2017) and Beyond the Gender Binary (2020). In 2019 they were honored as one of NBC's Pride 50 and Out Magazine's OUT 100. They have presented their work at 500 venues in more than 40 countries.

In this new book published by Penguin, Alok Vaid-Menon provides an accessible primer to gender fluidity, showing how a world beyond the gender binary of man and woman creates more freedom for everyone. They equip readers with the knowledge to counter the rise of anti-trans discrimination. This book invites the world to see gender not in black and white, but full color. 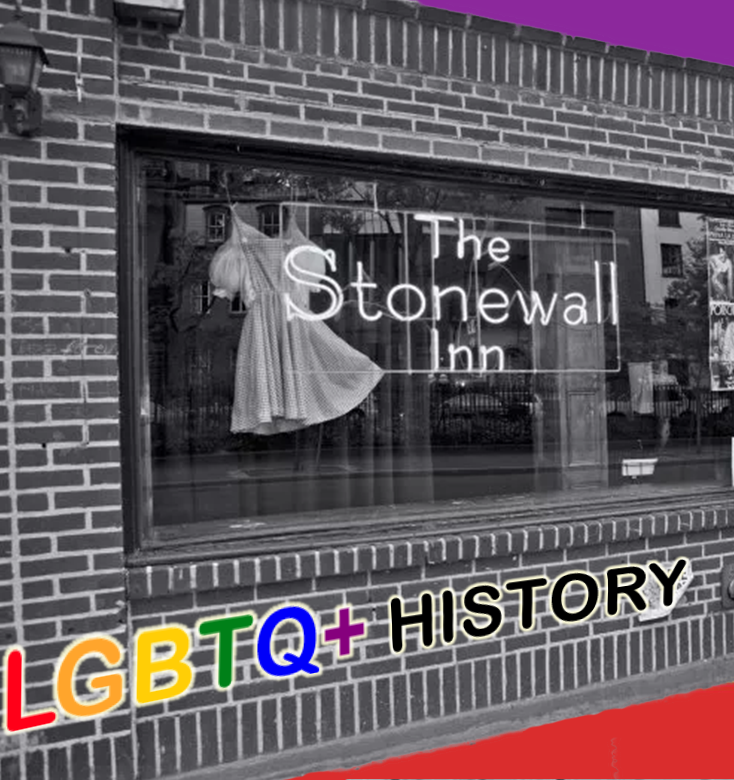 Pride is a time to celebrate and to remember.

Join us for a quick history lesson on the LGBTQ+ community and their journey starting at the cradle of civilization, all through today.

Participants will have the opportunity to ask questions, learn together and recognize our shared history. While we also celebrate LGBTQ+ History Month in October, let us remeber the fight and plight of queer people before us, whom without their sacrifice, we would not be able to celebrate.

This presentation will be facilitated through Zoom conference by our very own Ronnie Houchin (he/him/his), UAF Associate Director for Student Engagement and Advisor to ASUAF. 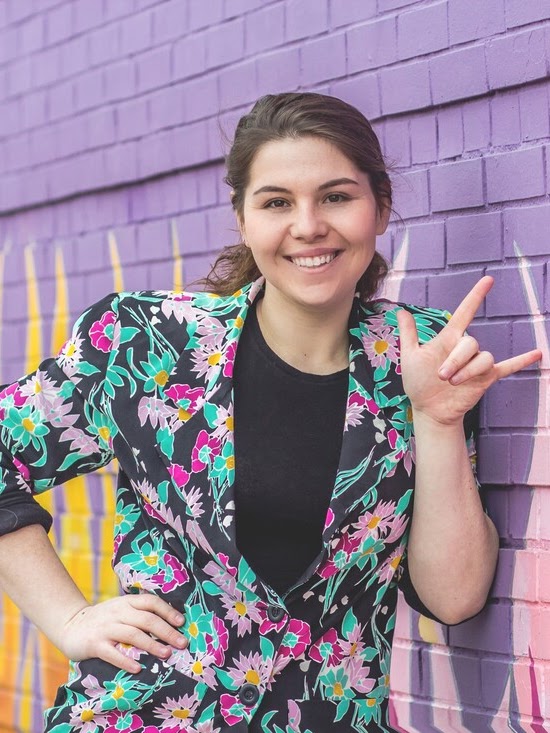 Hayden Kristal (They/them/theirs) is a Deaf, bisexual, Jewish, queer activist and stand-up comedian. Living their life at the intersection of multiple marginalized identities led them to a career as a professional speaker exploring the intersections of disability, gender, sexuality, particularly within the spheres of activism and social justice.

They have brought their funny, engaging, and interactive workshops and speeches to dozens of conferences and schools all across North America. In 2016, they delivered their first TEDxTalk, and was the recipient of a Catalyst Award from the University of Missouri, for their dedication to creating change for and within the LGBTQ community.

Join us for a night of laughs in a new format!

This event, as all others, is open to all audiences. An ASL interpreter will be on video to help with translation. 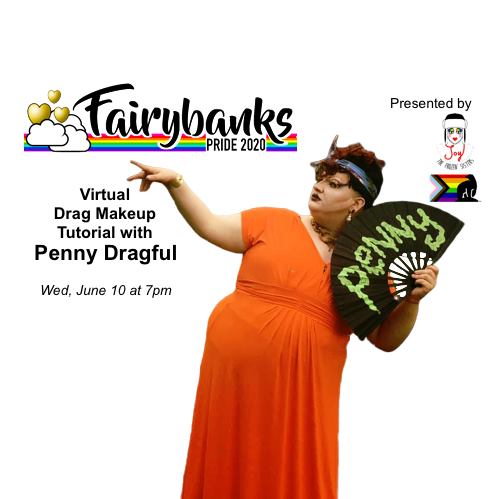 Penny is a local performer with Klondike drag here in Fairbanks and known for her lively, colorful performances that explore the macabre and pop art. She's excited to offer the community a beginner's crash-course in drag makeup while taking your questions.

Join us in our conversation about health and safety services available to our queer folks from various entities across alaska.

This panel of experts and health care professionals to talk about their services as well as how the LGBTQ+ community can reach out in spite of the COVID-19 pandemic.

Our goal is to provide resources to our queer community in the areas of healthcare and power-based violence during our time in quarantine.

This panel will be moderated by Caitlin Cameron, M.Ed., Prevention & Wellness Coordinator at the Nanook Diversity & Action Center. 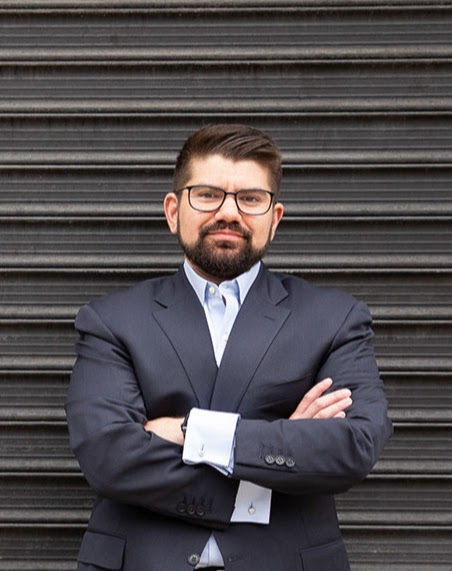 Ezra Young is a nationally recognized civil rights attorney based in New York City, and part of the group that worked towards the landmark Supreme Court case on queer protections in the workplace in June 2020.

His litigation and scholarship centers on trans rights and focuses on rights of recognition, employment protections, and health care and insurance coverage issues. Ezra's academic writing has appeared in or is forthcoming in books and articles published by Routledge, Oxford University Press, the New Press, California Law Review Online, and Plastic and Reconstructive Surgery.

Ezra currently serves on the board of the Jim Collins Foundation. He is a founding board member and past co-chair of the National Trans Bar Association. He has previously served as legal director of the African American Policy Forum, research director of the Columbia Center for Intersectionality and Social Policy Studies, and director of impact litigation of the Transgender Legal Defense and Education Fund,Inc. 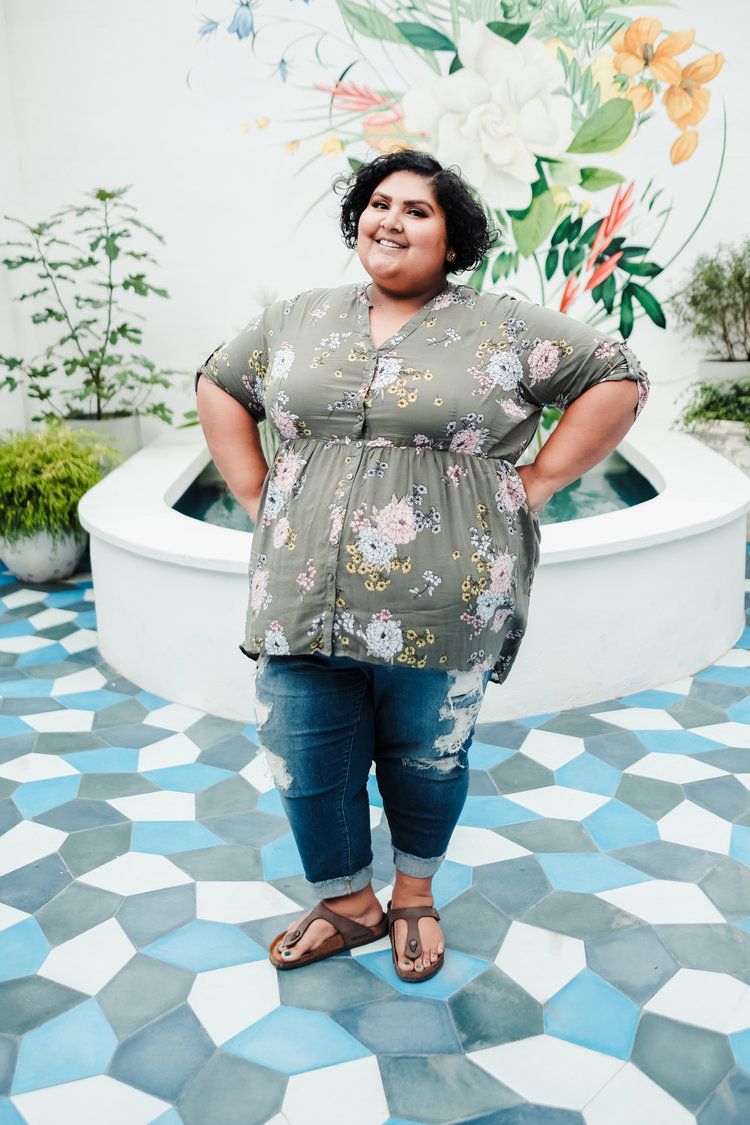 Join us in this workshop to talk about race, body liberation and connections with queer sex therapist and social worker Sonalee Rashatwar. 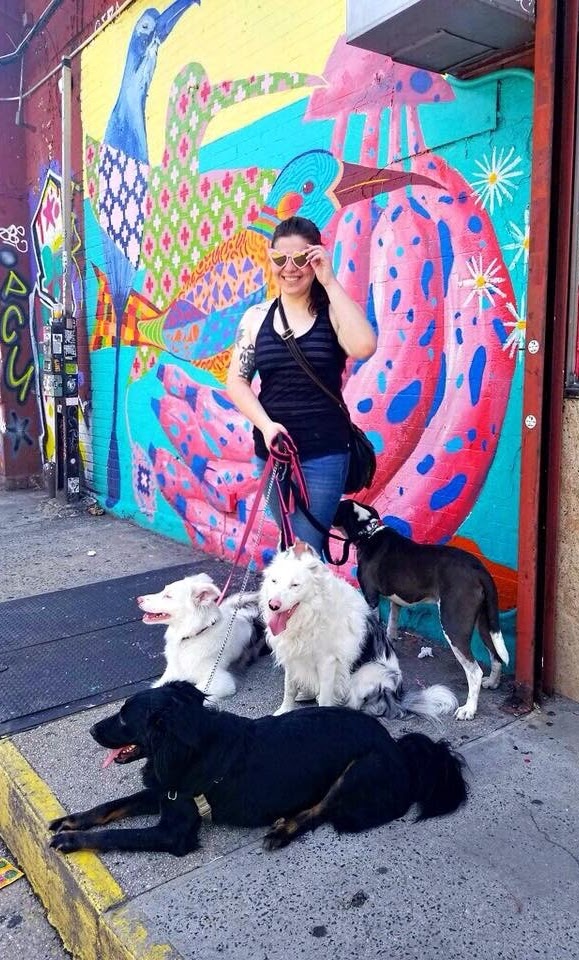 Hayden Kristal is a Brooklyn-based former zookeeper who gave up a lucrative career in salamanders to pursue comedy and public speaking. Speaking on the topics of diversity and intersectionality Hayden has spoken for colleges and organizations across the country including Harvard, Yale, Columbia, the Connecticut Supreme Court and TEDx.
GaySL is a highly interactive, variable, and hilarious workshop teaches its participants LGBTQ-related American Sign Language signs while fostering a group discussion about Deaf culture, intersectionality, accessibility and more.

During the presentation participants will be encouraged to sign along as we learn the signs for GAY, LESBIAN, BISEXUAL, TRANSGENDER, QUEER, GENDER, ALLY, COMING-OUT, PARTNER, BINARY, DRAG KING/QUEEN, IDENTITY, RAINBOW, PRIDE, etc., as well as requested signs. The signs serve as jumping off points for discussion about the intersection of Deafness and Queerness. (Example: ALLY- how does Deaf culture perceive LGBTQ people? How are the Deaf received by the LGBTQ community? What can you do to be a better ally to both groups?)

The goal for this workshops is not that participants will leave fluent in ASL. The point is to get people thinking about Deafness, disability, and the struggles faced by LGBTQ people who are also Deaf or disabled; to inspire people to learn more, and create accessibility to allow ALL LGBTQ people to utilize their resources and participate in their events.

Join us to learn about what it is like to be queer and a farmer or sustainability activist!

We will also explore how these identities intersect and why they play an important role, as well as how queerness connects to our panelists' role in their work as farmers and/or activists.

This panel will be moderated by Sinead Morris-McHugh, UAF Office of Sustainability