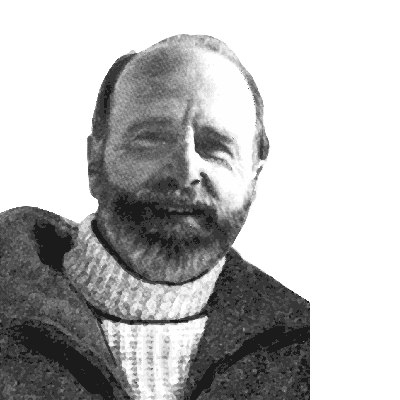 In midsummer 1979, UAF paleontologist Dale Guthrie got a call about some hooves, legs and skin that a miner had washed out of muck north of Fairbanks.

At the site, Guthrie found the long-frozen remains of an ancient bison, which launched a scientific story that continues to unfold today at UAF.

The bison appeared to have been alive about 35,000 years ago. Puncture wounds in the hide came from a lion. It probably killed Blue Babe during the winter and didn’t finish the meal before silt buried the carcass the next spring. The cold climate then froze the soil and the bison.

Some of the meat was so well preserved that the Guthries and a few others even made a meal of it.

“With a good burgundy to brace the rather muddy tone of the main dish, we toasted the past and present in the long evening twilight — a taste of the Pleistocene,” Mary Lee Guthrie later wrote of the dinner.

Dale Guthrie was born and educated in Illinois. After earning a doctorate at the University of Chicago in 1963, he joined UAF’s biology faculty. He retired in 1996 but has continued to research, teach and write in a variety of fields.

In 2004, Guthrie published a study revealing that mammoths lived on St. Paul Island in the Bering Sea for thousands of years after they went extinct on North America’s mainland. In 2006, another of his studies concluded that climate change, not human hunting, was the main reason wild horses and mammoths died out in North America.

Guthrie’s 2005 book, “The Nature of Paleolithic Art,” analyzed cave paintings and other remnants from ancient peoples, which he began studying in detail while analyzing Blue Babe. The book contains more than 3,000 images, the largest compilation of Paleolithic art ever published. Among other innovations, Guthrie used forensic techniques to determine the age and sex of the artists.

"I found that all ages and both sexes were making art, not just the senior male shamans," Guthrie said.

At UAF, Guthrie no doubt will always be most remembered for his work on Blue Babe because the bison’s preserved skin is now publicly displayed on a model at the University of Alaska Museum of the North.

However, the head and horns were frozen. UAF researchers continue to analyze Blue Babe to uncover clues about the ancient environment and its plants and animals.