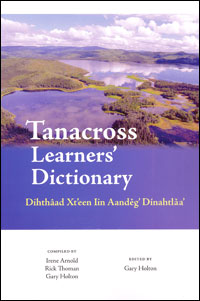 The Tanacross Learner's Dictionary is intended as a reference for anyone wanting to learn the spoken Tanacross language. The subject matter and the level of complexity are varied enough to make the dictionary a useful resource for a wide range of users, from people who know nothing of the language to people already know some words and phrases or have heard the language being spoken by their parents or grandparents. The dictionary consists of about 2000 English entry words with nearly 4500 Tanacross words and example sentences and clickable links to about 3800 separate audio recordings of the Tanacross words and sentences.

This dictionary has a long history. Through the efforts of people such as nancy McRoy, Ron Scollon, Alice Brean, and James Kari a number of wordlists and dictionary manuscripts were complied at the Alaska Native Language Center between 1973 and 1991. Dictionary work began again in 1997 as part of field work by Gary Holton, but this effort was focused on a scientific, stem-based dictionary. After Irene Arnold began teaching Tanacross language classes through the University of Alaska Fairbanks in 2000, it was recognized that students needed a more accessible vocabulary reference, preferably one accompanied by audio recordings. One of those students, Rick Thoman, perservered to make the present Learners' dictionary come into reality.

Many sources have been consulted for this dictionary, but the vocabulary remains grounded in and inspired by the language classes taught by Irene Arnold. This classroom vocabulary has been supplemented by archival data and consultations with other Tanacross speakers. More than a dozen language workshops have been held in the Tanacross area since 1998, including three focused on the Tanacross Learner's Dictionary. Individual speakers have worked long hours with the editors on this and related projects. As with any dictionary project, it is difficult to know when to stop compiling and revising. There are many more Tanacross words and phrases to be recorded. The vocubulary found in this preliminary version of the Tanacross Learners' Dictionary is by no means exhaustive, but it is hoped that it will be useful to language learners.

Although the Tanacross language has been spoken for many generations, systems for writing the language have only recently emerged. The writing system, or orthography, used here follows that developed in the 1990's by the Yukon Native Language Centre and the Alaska Native Language Center, as exemplified in Irene Solomon-Arnold's Tanacross Language Lessons (1994) and Tanacross Phrases and Conversations (2003).

The writing system makes use of many of the symbols in the English alphabet, supplemented by a one special character (the "barred-l" ł) and several diacritic marks, including a nasal "hook" below vowels and four kinds of tone marks above vowels, for example, high tone é, rising tone ě, falling tone ê, and extra-high tone é́. It is perfectly possible (and permissible) to write Tanacross without tone marks, as speakers will generally be able to supply the correct tone (see Holton 2003). However, tone marks have been included in this dictionary in order to assist language learners in learning the correct tone pronunciation.

Many Tanacross sounds are represented by more than one alphabetic letter or symbol. However, both individual letters, such as s, and letter combinations ("blends" or "letter groups"), such as sh, are referred to here as letters.

The characters displayed in this online version of the dictionary make use of a unicode font. Your browswer must support unicode character encodings in order to correctly view the special Tanacross characters.

Many different practical orthographies have been used to write Tanacross in pedagogical and linguistic publications. Leer (1982) recognizes three distinct phases of Tanacross orthography. The first stage is exemplified by Nancy McRoy’s work in the early 1970’s (cf. McRoy 1973). The second stage is exemplified in the work of Ron Scollon later in the same decade (Scollon 1979; Paul 1980). The third stage is exemplified by Leer’s work with Alice Brean in the early 1980’s. The system employed in Kari’s work can be said to represent a fourth stage chronologically, though it is in many ways a hybrid of the second and third stages (Kari 1991b, 1991a). Kari’s system incorporates the vowel system and tri-graph dental affricates (tth and ddh) of the third stage but does not distinguish semi-voiced fricatives with underscore. A fifth stage of Tanacross orthography is exemplified by publications of the Yukon Native Language Centre (Solomon 1994, 1996; Isaac 1997) and the Alaska Native Language Center (Arnold 2003). This orthography incorporates the stage three changes and adds five types of vowel tone marking. This system is employed in most current Tanacross work, including that presented in The Sounds of Tanacross .

By far the best way to learn the pronuciation of Tanacross words is to hear them spoken, either as pronounced by a Native speaker in person or via the recordings on this site. The following description will give some idea of the sounds associated with the symbols used in the Tanacross writing system.

Sounds which are written and pronounced as in English

A number of letters and letter combinations used in the Tanacross alphabet have roughly the same pronounciation as they do in English.

Sounds which occur in English but are spelled differently in Tanacross

At least one Tanacross sound does occur in English but is spelled differently.

Sounds which do not occur in English

Still other Tanacross sounds do not occur at all in English and hence must be written with a special letter or combination of letters.

One very noticeable set of sounds which do not occur in English are the glottalized or ejective consonants. These sounds are a feature of all Athabascan languages (and many other Native American languages). When the apostrophe follows certain consonants, it indicates a glottalization, a “catch-in-the-breath” sound formed by using the closed vocal chords to compress the air in the vocal tract. Glottalized sounds are sometimes found at the end of English words (for example, some speakers’ pronunciations of “back”).

The apostrophe and the hyphen

The apostrophe ( ' ) has a special meaning in the Tanacross alphabet. By itself it indicates a glottal stop, the sound which occurs in the middle of the English exclamation uh-oh. Sometimes it is necessary to indicate that a glottal stop is not part of the previous letter. In this case, a hyphen (-) is used to separate the previous letter and the glottal stop. An example is nek-'ęh ‘I see’. It would be wrong to write this as nek'ęh because this word does not contain a glottalized-k (k').

Tanacross has five vowel symbols: i, e, a, o, u. All but o can occur either long or short. The long vowels are written double. The exact pronunciation of long versus short vowels may vary depending on context.

Vowels may be nasalized, that is, pronounced with air coming out through the nose as well as the mouth. This is indicated with the nasal hook underneath the vowel. Note that the vowel o does not occur nasalized.

Vowels may also be marked for tone using one of four diacritic marks above the vowel. Low tone is unmarked.

It should be noted that learning materials use tone marking to aid in learning to pronounce Tanacross words correctly. Fluent speakers will have no trouble producing the correct tone without the aid of any tone marking. It is thus perfectly possible and acceptable to write Tanacross without the tone marks.