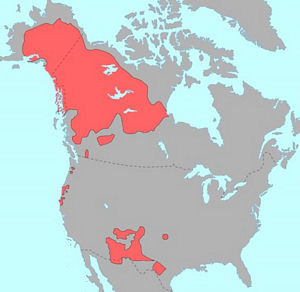 The Athabaskan/Dene language family is one of the largest language groups in North America, spanning the subarctic region nearly from the Bering Sea to Hudson Bay, and from near to the Arctic Coast as far south as the Rio Grande River.

The Athabaskan/Dene Languages Conference meets annually in early summer in various locations throughout the Athabaskan/Dene speaking region. The conference brings together linguists, speakers, educators and policy makers from across this diverse region. Over the past three decades this conference has become the principal forum in which members of geographically distant but culturally and intellectually related communities can compare notes and learn from each other.

The proceedings of many of the conferences since 2001 have been published in the   ANLC Working Papers   series. These may be ordered from ANLC by contacting (907) 474-7874 or fyanlp@uaf.edu.

In recent years the conference and language family have been referred to as both Dene and Athabaskan (with various spellings). In recent times the word Athabaskan has been rejected in some parts of the region in favor of Dene, which approximates the word for 'person' in many of the languages. The term Dene has gained less currency in Alaska, perhaps due to the fact that the word for 'person' in many Alaskan languages is quite different (e.g., Gwich'in dinjii). For the purposes of the conference, the names are used interchangeably.

The name Athabaskan itself has a complex but well-known history. It derives from a place name in the Cree language of western Canada. The name in Cree is something likeahdhap-ask-a-w, which translates roughly as 'where there are plants distributed in a net-like pattern', as in a shallow end of a lake. The name is fairly common in Cree, but the actual place it originally referred to is unknown. It is now the name of a large lake known in English as Lake Athabasca.

This Cree place name was first used to identify a language family by Albert Gallatin, a businessman and politician who had a particular interest in the classifications of Native American languages. In 1826 Gallatin concluded that all the "inland tribes" of the northwestern part of North America belonged to one family and spoke related languages. He acknowledged that the name for these related languages was entirely his own individual preference. "I have designated them by the arbitrary denomination of Athabascas, which derived from the original name of the lake," he wrote. Since then the name has been variously spelled Athapaskan,   Athabaskan,   Athapascan, andAthabascan.

For more information about the history of this name, see Michael Krauss' 1987 article The Name Athabaskan.