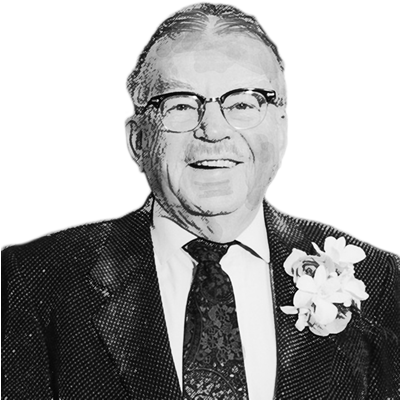 Elmer E. Rasmuson, one of Alaska's most prominent leaders during the last half of the 20th century, often focused his civic energies on boosting the University of Alaska.

This fit with Rasmuson's desire to help his home state grow more independent and prosperous. But his support also reflected his unbounded interest in the world around him and his enthusiasm for learning.

"Without question this is the smartest person I ever met in my life," Terrence Cole, a UAF history professor, told a newspaper reporter after Rasmuson died in 2000. "This is not just some rich guy who counts his money. … This is somebody who is interested in everything all the time."

Cole worked with Rasmuson for about a decade chronicling the history of the National Bank of Alaska. Rasmuson became bank president in 1943. He replaced his ailing father, who had saved the original institution in Skagway during the post-Gold Rush era.

Rasmuson and his family built NBA into the largest bank in Alaska before selling it to Wells Fargo in 2000, just before his death. He willed most of his estate, valued at more than $400 million after the bank sale, to the Rasmuson Foundation. The previously modest entity, created in 1955, became one of the largest family foundations in the Pacific Northwest. It distributed more than $11 million in grants throughout Alaska in 2016.

Rasmuson joined the UA Board of Regents in 1950 and served until 1969. It was a time of astounding growth for the university, much of it encouraged by Rasmuson. He served as president during his last dozen years on the board.

The board named the library on the Fairbanks campus after Rasmuson in 1970 to recognize his service. His subsequent contributions greatly expanded the materials held by the library's Alaska and Polar Regions Collections and Archives.

As a banker, Rasmuson had a longstanding relationship with the fishing industry. In 1994, he created the UAF Rasmuson Fisheries Research Center, to which he and his estate contributed millions.

At the 2017 Blue and Gold Gala in Fairbanks, which celebrated the university's first 100 years, UAF named Rasmuson and his late wife, Mary Louise, among the institution's Philanthropists of the Century.