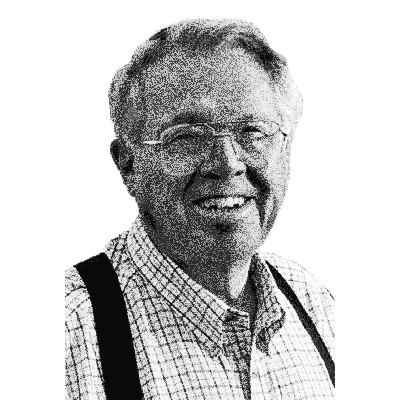 One of the aurora’s most fantastic features revealed itself to researchers at the University of Alaska Fairbanks in the late 1960s, and Neal Brown was part of the team to discover it.

Brown and others confirmed that auroras appear simultaneously in the northern and southern hemispheres.

“The auroras were conjugate, identical to one another, within two seconds,” Brown recalled in a 2018 interview with KUAC journalist Robert Hannon.

Brown helped capture the evidence using photographs. Two sets were taken from separate aircraft flying at the same moment high above opposite points on the Earth.

Brown, who grew up on a farm in eastern Washington, had been drawn to the aurora after graduating in 1961 from Washington State University with a physics degree. The catalyst was a job with NASA, where he worked with a team trying to figure out how to prevent space vehicles from burning up when re-entering the Earth’s atmosphere.

“You can study the atmosphere — ascertain temperatures, pressures, chemical compositions in the atmosphere — all of those things just from looking at the light from the aurora and breaking it down with a spectroscope,” he recalled. “So I was fascinated by that.”

“They went on without me and built other hardware,” he said with a laugh.

So, after spending a year at Thule, Greenland, Brown earned his master’s degree in geophysics at UAF in 1966 and went to work at the Geophysical Institute. That’s how he ended up photographing the aurora from a plane flying above Alaska while its counterpart flew out of New Zealand.

In 1971, the institute hired him to direct its rocket-launching facility north of Fairbanks, the Poker Flat Research Range.

“It was kind of a crazy Alaska homesteader sort of operation,” he said. “We did everything ourselves.”

Brown directed Poker Flat for 18 bustling years. “I think I clocked out at 219 launches,” he said.

In 1989, Brown took a sabbatical and found a new interest — science education and communication.

He began lecturing and teaching for numerous schools and organizations. Though he retired from an assistant professor position at UAF in 1995, he didn’t slow down. From 2002-2008, he directed the Alaska Space Grant Program, a UAF-based consortium that enhances teaching, research and education in the fields of aerospace and earth sciences.

Unlike many of his peers, Brown never earned a doctorate in science. Running Poker Flat kept him busy, and he and his wife had three children.

But his ability to explain science and his passion for the topic earned him that long-delayed Ph.D. UAF granted him an honorary doctorate for his science communication work in 1997.

“My basic skill I think is an incredible curiosity and enthusiasm, and I try to bring that across, particularly to people I’m talking to, or with kids, to get them interested,” Brown told Hannon in the 2018 interview. “Usually if you’re really excited about something, everybody wants to help you.”