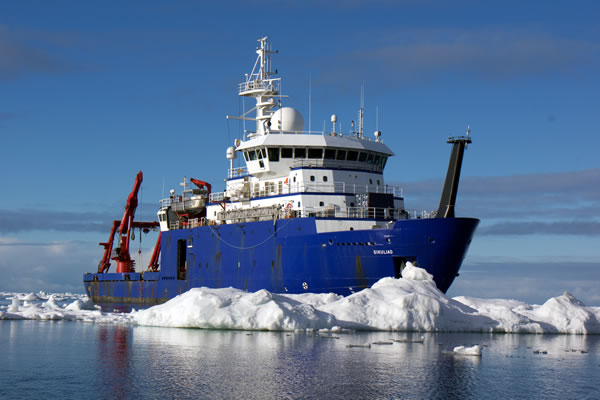 The College of Fisheries and Ocean Sciences has operated research vessels since the 1960s, beginning with the 80-foot research vessel Acona and eventually the 120-foot RV Alpha Helix in the late 1970s.

But in the 1970s, University of Alaska scientists saw a niche that was not being filled in Arctic research: a vessel that was large enough to operate in and near thin sea ice, but not quite so large as an icebreaker. These scientists developed a conceptual design for an ice-capable research vessel that would enable extended operations during icy months, when most ships can’t operate in the North Pacific and Arctic Ocean.

This idea, supported by scientists around the country, culminated in the construction of the 261-foot RV Sikuliaq by the National Science Foundation in 2014. UAF began operating the vessel in 2015 out of its home port of Seward.

The Sikuliaq is one of five global-class vessels in the UNOLS fleet and the only one that is ice-capable. Global-class vessels are the biggest in the fleet, can stay out at sea the longest and can support the greatest number of researchers and crew. The ship, which can carry 22 crew members and 24 scientists, is equipped with the most modern scientific instrumentation, several laboratories and internet capacity.

Four decades after it was envisioned by the UA researchers, the Sikuliaq has successfully increased the opportunity for scientists from all over the world to conduct research in icy Arctic waters.