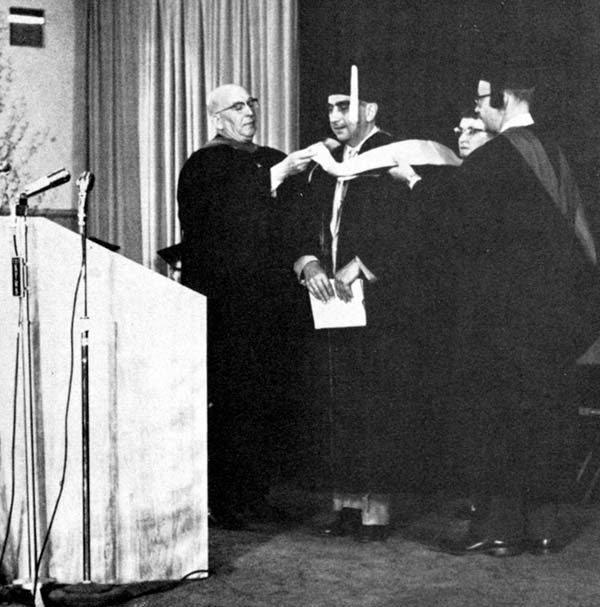 From the 1959 Denali yearbook: Edward Teller, who backed a controversial plan to create a deep-water Alaska harbor with an H-bomb, received an honorary degree and was commencement speaker at the University of Alaska in 1959.

The U.S. Atomic Energy Commission decided in 1958 that it would be a good idea to use six nuclear blasts to excavate a harbor near Point Hope, Alaska. The commission called it Project Chariot.

The next year, the University of Alaska got a $107,000 contract from the AEC to study the environmental impacts of the proposal. The university, demonstrating its enthusiasm for the idea, granted an honorary doctorate to Edward Teller, the "father of the H-bomb," who was then directing an AEC lab in Livermore, California.

As the environmental research progressed, several university scientists objected to the way AEC officials downplayed the risks of radioactive fallout. In 1961, biologist Les Viereck resigned from the contract work in protest. His decision cost him his teaching job -- the university administration declined to keep him on staff. The next year, biology Professor William Pruitt was fired after he resisted modifications to his report to the AEC and publicly criticized the proposal.

The AEC dropped Project Chariot in August 1962 in response to the growing criticism from scientists, environmental activists and Alaska Native peoples.

The university's treatment of Viereck and Pruitt under then-President William Wood remained controversial for decades. After a campaign by faculty, UAF presented the two researchers with honorary doctorates at the 1993 commencement. Author Dan O'Neill, who worked as an oral historian at UAF, documented the history and conflict in his 1994 book, "The Firecracker Boys."