Exporting peonies to the world 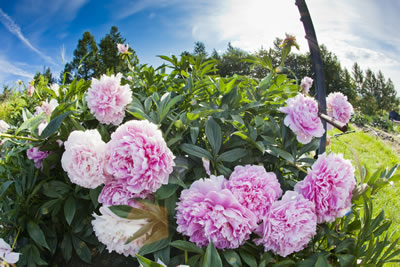 UAF Professor Pat Holloway, who spent her career researching potential horticultural crops for Alaska farmers, just happened to mention at a conference that peonies mature in Alaska in July and August. An Oregon flower grower told her that peonies do not mature elsewhere in the world at that time. If peonies could be grown commercially in Alaska, they could fill an international niche.

Holloway planted the first experimental field of peonies at the Georgeson Botanical Garden in 2001. She has spent more than 15 years experimenting with varieties and growing methods and developing information for growers. Outreach and site visits by Holloway and UAF Cooperative Extension Service agents extended knowledge about growing peonies.

The Alaska Peony Growers Association reported that 69 Alaska growers had planted peonies as of 2016. More than half were still waiting for their first crop, since it takes three to five years for plants to mature. Weather challenges led to disappointing sales in 2015, but the 2016 crop was stronger. The final numbers aren’t in yet, but one large grower sold 60,000 stems, and others reported good sales. Depending on the buyer, stems sell from $3 to $7 and higher. Alaska peonies have been sold to markets in the U.S., Canada, Taiwan and Singapore.