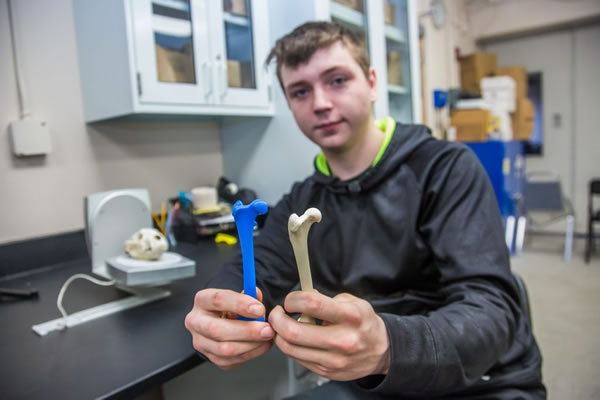 Dillingham High School student Max Bennett displays a bone along with a duplicate that he created on a 3-D printer. The technology was used to replicate the skeleton of a fetus taken from the womb of a pregnant Orca that washed ashore near Dillingham in Alaska's Bristol Bay a few years ago. Bennett earned high school credit through a cooperative agreement with UAF's Bristol Bay Campus while working on the project. UAF photo by Todd Paris

In September 2011, the people of Bristol Bay were surprised to discover three killer whales 40 miles up the Nushagak River. The orcas eventually died from a combination of hunger and stress, but that unfortunate result provided a unique opportunity for students at the UAF Bristol Bay Campus.

The body of one of the whales was pulled ashore in Dillingham, where a necropsy revealed it was a pregnant female. Almost spontaneously, an unprecedented project emerged — rearticulating the fetal skeleton using a 3-D printer.

After hours spent meticulously cleaning, sorting and documenting hundreds of bones, university officials and Dillingham High School students began the time-consuming task of scanning and reproducing them. Making plastic models of the roughly 300 whale bones took until February 2017, when the long task of assembling the skeleton began.

Using 3-D technology was a necessity, since many of the bones were extremely delicate or not fully formed. The project — believed to be the first construction of a fetal orca skeleton — consisted of sizes ranging from a pencil eraser to a large boomerang-shaped bone.

Archiving the skeleton could create a special opportunity for researchers around the world. Ultimately, the work may allow scientists to download the scans and even assemble their very own copy of the Bristol Bay orca fetus.