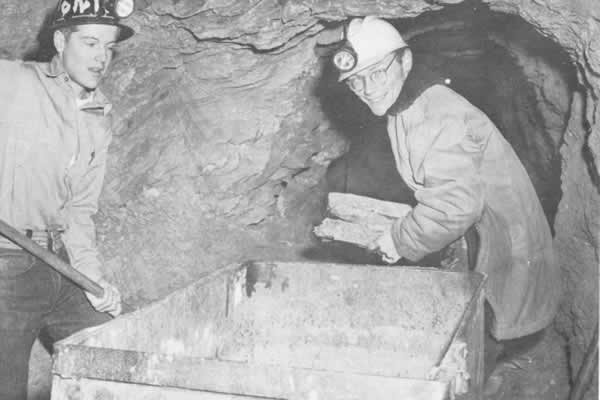 Students "muck" the campus mine after a blast knocked rock from the shaft. Source: 1958 Denali yearbook 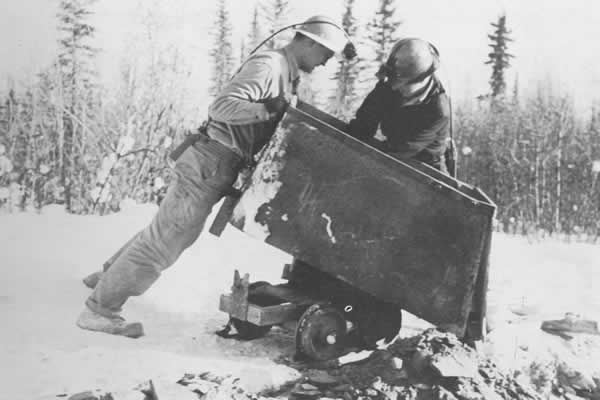 Students dump a mine car filled with debris from the campus mine, which was located below the road leading to the university. Source: 1958 Denali yearbook

Too many college graduates from U.S. engineering schools had no idea how to “set up a machine, drill and blast a round, and put in a set of timbers,” Professor Ernest Patty observed in the March 1928 edition of the Farthest North Collegian.

Patty, one of the original six faculty members at the Alaska Agricultural College and School of Mines, made sure that wouldn’t happen at his school. Every student in his program would take a class in real-life mining, Patty decided that year.

The campus sat on a lump of schist topped with fine loess — both of little value from a miner’s standpoint. Nevertheless, the School of Mines students set about blasting a shaft into the hill. They loaded mine cars with the debris and rolled them out the shaft. As they worked, they cut spruce logs from the flats south of the campus and squared them up for tunnel support timbers.

The school also acquired a ball mill to crush ore and the equipment to analyze its mineral content. Since the college’s schist didn’t contain much of interest, it took ore from local miners to crush and analyze.

The training helped students get summer jobs in the local mines, which gave them the money to stay in school. Many grew into industry leaders in not only Alaska but across the globe.