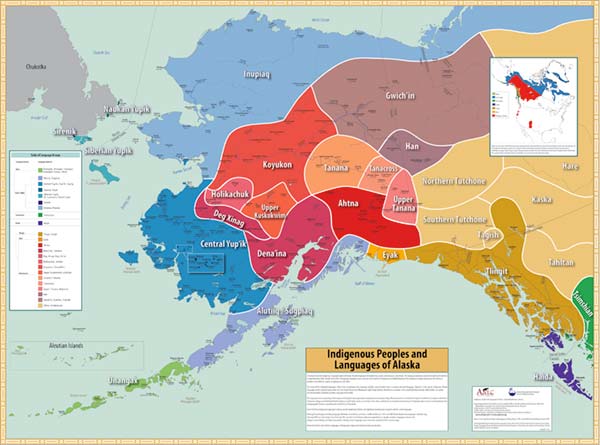 An iconic map that shows where the 20 Native languages of Alaska were spoken during the 20th century has become a touchstone for efforts to document and revitalize those languages.

UAF linguist Michael Krauss created "The Native Peoples and Languages of Alaska" map after interviewing people across the state and analyzing their languages. The map was first published in 1974 and shows several languages that are in danger of fading, since few children speak the languages today.

Krauss, who came to the University of Alaska to teach French, eventually founded and became the longtime director of the Alaska Native Language Center. He led many efforts to document and preserve the languages on the map.

His map was not the first to locate Alaska Native languages, nor the last. Many earlier maps included errors, and many later maps used Krauss' work as a point of departure. Yet his map is recognized across the state.

"In Alaska today, the map is ubiquitous," wrote Gary Holton, the former director of UAF's Alaska Native Language Archive. "It is found in nearly every government office and school, and it has become ingrained on the public consciousness, both Native and non-Native. The boundaries on the map have become so entrenched that they are often assumed to be statements of undisputed fact akin to the location of a mountain or a political boundary."