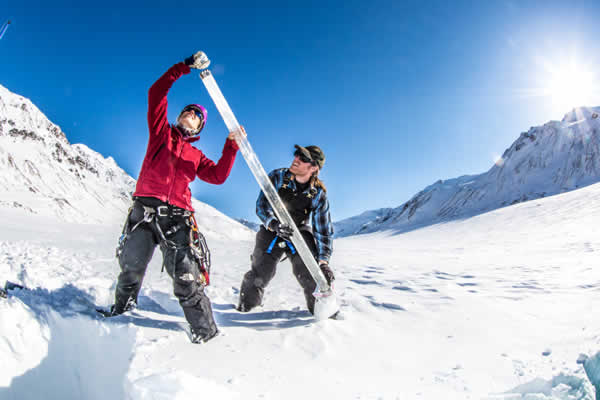 Anna Liljedahl, research assistant professor with UAF's International Arctic Research Center and Institute of Northern Engineering, works with Will Wright of the Delta Soil and Water Conservation District to collect snow samples from the surface of the Jarvis Glacier, about 45 miles south of Delta Junction. UAF photo by Todd Paris

University of Alaska Professor Eb Rice literally wrote the book on Arctic engineering with his 1975 tome, “Building in the North.”

Rice’s influential work on cold-weather construction was decades in the making. Soon after he began teaching at UA in 1955, Rice realized that Lower 48 engineers, architects and contractors were often unsuccessfully trying to apply skills they learned in warmer climates to Alaska projects.

The most infamous example of a misguided design was the initial plan for the trans-Alaska pipeline — burying it underground, “just like we do it in Texas.” Sending the hot-oil line through hundreds of miles of permafrost would have been a disaster. Instead, the design that was later approved — considered a landmark of modern engineering — was molded by Rice’s teachings.

Rice infused UA’s engineering program with the basic rules of building in the Arctic, factoring in weather, logistics, permafrost, insulation, sanitation and safety. He later promoted regulations and educational materials that ensured people building in Alaska had the necessary training to plan, design and construct safe, efficient projects in the state.

Those lessons continue today at UAF’s Institute of Northern Engineering, which is home to many of the world’s leading researchers in cold climate science and engineering.