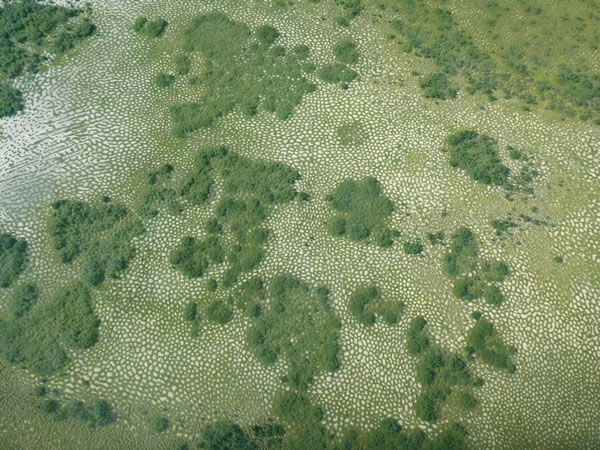 Using 29 years of data from Landsat satellites, researchers at NASA have found extensive greening in the vegetation across Alaska and Canada. Rapidly increasing temperatures in the Arctic have led to longer growing seasons and changing soils for the plants. Scientists have observed grassy tundras changing to scrublands, and shrub growing bigger and denser. From 1984&ndash;2012, extensive greening has occurred in the tundra of Western Alaska, the northern coast of Canada, and the tundra of Quebec and Labrador. Credits: NASA's Goddard Space Flight Center/Cindy Starr

If you take a walk in the high Arctic, you may not notice the effects from climate change on the flora. But if you look from space, over decades, the change is obvious.

Donald “Skip” Walker, a geobotanist with the University of Alaska Fairbanks’ Institute of Arctic Biology, saw the pronounced greening trend in Alaska’s Arctic after looking at years of satellite data dating back to the 1980s. His observations eventually launched a major investigation of Arctic greening patterns spanning two continents and a decade of research.

Changes to the vegetation begin with changes to the soil. Frost boils are one result of warming. As the ground freezes, underground ice pushes the soil up. When it thaws, the center collapses, leaving an indentation often colonized by shrubs. Elsewhere, there is more small plant life. After reviewing satellite imagery, the team identified a 20 percent increase in Arctic plant biomass during the last 30 years.