Developing a breadbasket in the North 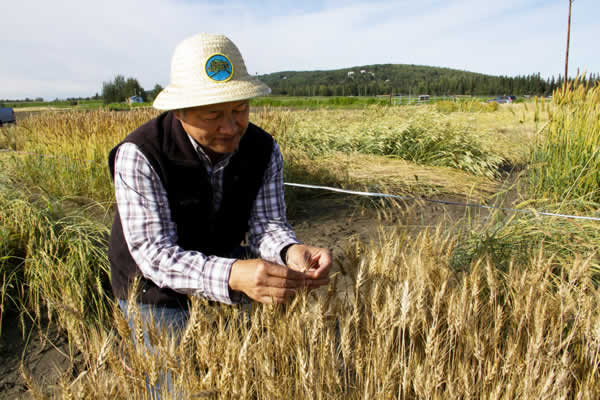 In a quest to improve Alaska’s food security, university researchers have been trying for more than 100 years to find or develop varieties of grain that grow well in Alaska.

They have had some success. The Agricultural and Forestry Experiment Station released the hull-less Sunshine barley variety in 2009, which is grown successfully and milled in Alaska for baking.

Finding a wheat variety has taken longer. The first variety trials were conducted in 1898 at the Sitka Experiment Station and continued at experiment stations in Rampart, Fairbanks and Palmer.  The goal is to develop a variety that matures early, provides a high yield and has good baking quality. The most recent variety selected was Ingal in 1981, which had good qualities but suffered from “shattering,” or grains falling off the plant before harvest.

Headed by UAF agronomist Mingchu Zhang, research on wheat started anew in 2010, with the help of a Washington State University wheat breeder and his graduate students. Eighty varieties were tested in the summer of 2016, including crosses developed by two doctoral students and 68 varieties from Nordic countries.  A few varieties look promising, but tests need to continue for a few more years until a variety is selected.

A warming climate could make the quest easier. According to Zhang, it could lead to more hospitable conditions for growing wheat in Alaska.