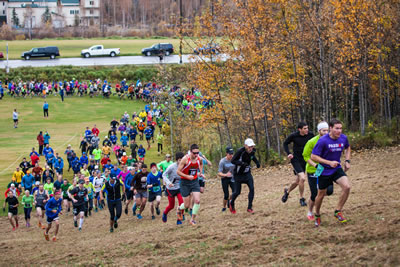 It’s both a long run and one of the longest-running, most grueling and uniquely Alaska races in the world — the Equinox Marathon and Relay.

A group of University of Alaska Fairbanks athletic coaches and UAF student skiers, including Nat Goodhue ’65 and Gail Bakken ’65, founded the coed race in 1963. Just one year earlier, only 13 marathons were held across the United States, and not all of them allowed women to run.

While the marathon’s founders could have made it a road race, they wanted routes to wind through the birch and spruce forests and reach the highest point attainable on a marathon starting from UAF. Goodhue and Bakken cleared a good portion of the trails on Ester Dome and didn’t let a bear encounter dissuade them from completing their mission.

The Equinox begins at UAF’s Patty Center, follows UAF’s ski trails, summits over Ester Dome and winds back before returning to the Patty Center. The hills require competitors to climb a cumulative 3,285 feet and descend the same amount.

The inaugural Equinox not only had a women's and men’s division but also had a boys' and girls' division. It featured more than 100 starters — 24 men, eight women, 21 boys and 64 girls. Sixty-seven racers finished, including 29 female competitors. Appropriately enough, Goodhue and Bakken both finished first in their division during the inaugural race.

In later years, the race grew in entrants until it rivaled and outgrew the Boston Marathon for several years. As of 2016, the race is in it its 54th year.