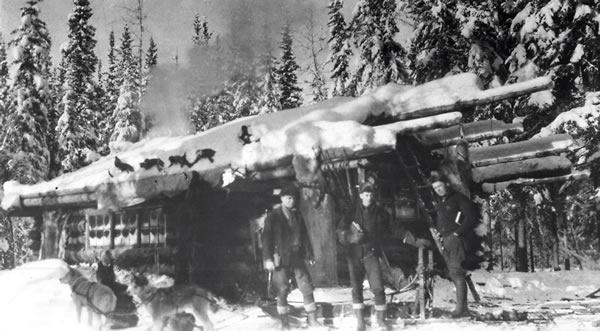 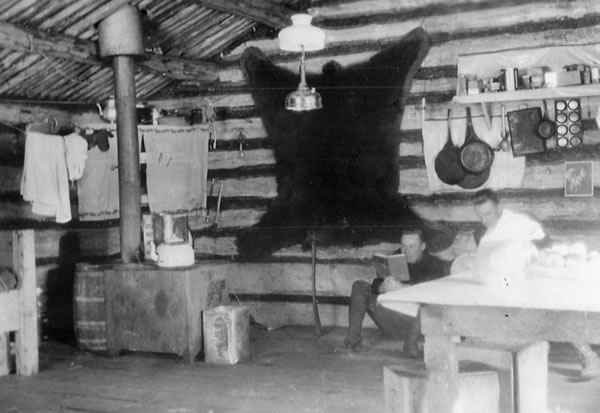 The inside of the Loftus brothers’ cabin in 1923. Dorothy Loftus Collection, Rasmuson Library archives

Students began living near campus in rough cabins with wood stoves and no indoor plumbing shortly after the Alaska Agricultural College and School of Mines opened in 1922. The lifestyle, passed through generations of students, continues to thrive today in the woodsy neighborhoods near campus.

The college’s first graduate, Jack Shanly, staked a homestead and built a cabin in the flats east of campus. The Loftus brothers — Art, Ted and Jule — did the same in the early 1920s.

University President Charles Bunnell personally acquired some of the cabins and used them to recruit students. In fall 1939, Ray Smith, Lloyd Atwood and Ernie Wolff occupied a Bunnell cabin near Noyes Slough rent-free in exchange for improvements.

“We had a huge supply of wood cut and stacked outside the cabin, a cache full of caribou, a root cellar with vegetables, box after box of dried blueberries and low-bush cranberries,” Smith wrote many decades later. “Our first winter in Alaska was assured.”

The early cabin dwellers sometimes carried a strong odor. “The worst offenders were the ‘wildlife types’ (students in the field who typically dressed the part) and the students who lived off campus in cabins or shacks,” recalled Neil Davis in his book, “The College Hill Chronicles.” In classrooms, their coats would form “a pile which became more malodorous as it grew in size.”

Starting in the 1960s, new athletic facilities and campus buildings with showers moderated that problem.

In the 1970s, the counterculture and back-to-the-land movements, as well as a housing shortage caused by trans-Alaska oil pipeline construction, further entrenched the cabin lifestyle.

“Dry cabins” remain popular today. As Art Loftus observed in a column for the June 1924 Farthest-North Collegian, “Here are the advantages of civilization, combined with the lure of the wilderness.”