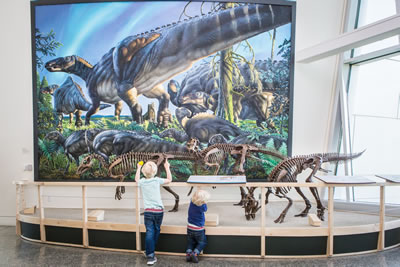 Fifty years ago, paleontologists would have told you that no dinosaurs had ever lived in Alaska. In the 1980s, though, rocks found two decades earlier on Alaska's North Slope were identified as dinosaur fossils. Today, UAF paleontologists have been collecting fossils for more than 25 years, amassing the world's largest assemblage of Arctic dinosaur specimens in the collections at the University of Alaska Museum of the North.

These footprints, bones and other fossilized remains have led to the identification of at least 13 species unique to Alaska. The most recent discovery is Ugrunaaluk (oo-GREW-na-luck) kuukpikensis (KOOK-pik-en-sis), a plant-eating dinosaur about 30 feet long that lived 69 million years ago above the Arctic Circle. The scientific name, which in Latin means "ancient grazer of the Colville River," was chosen by scientists, Iñupiaq speakers and scholars at UAF.

Research shows that these were the northernmost dinosaurs to inhabit the planet. Alaska's polar forests of 70 million years ago were home to a distinct community of dinosaurs that thrived in an extinct ecosystem. It turns out that Alaska is the best place in the world to catalog the conditions and species that lived in the Arctic during the Age of Dinosaurs.