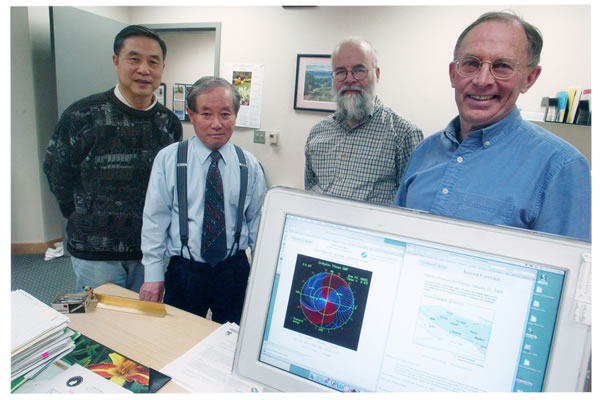 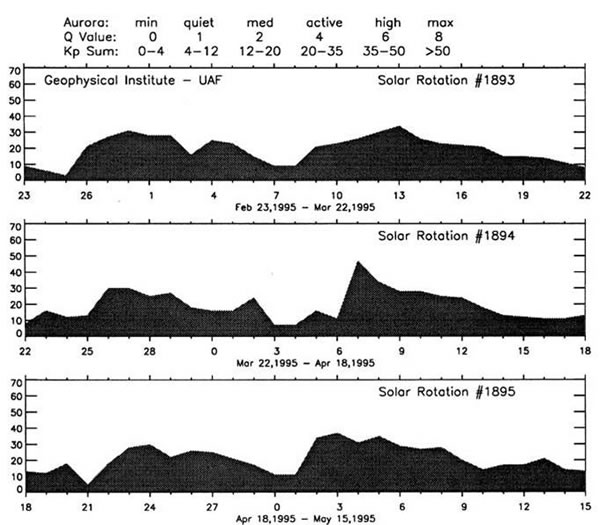 During the 1990s and early 2000s, staff at the GI faxed a chart like this each week to 200 people to provide an estimated forecast of auroral activity. Graphic courtesy Charles Deehr, UAF Geophysical Institute 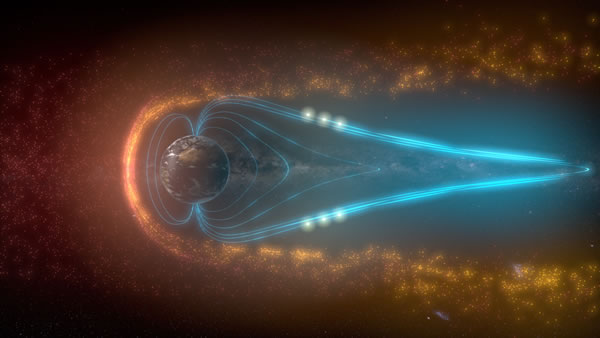 The solar wind is depicted in this graphic as particles arriving from the left and interacting with the Earth's geomagnetic field, which results in aurora borealis around the North Pole and aurora australis at the South Pole. Graphic courtesy Hannah Foss, UAF Geophysical Institute

The first question many visitors to Alaska ask is, "Where and when can I see the Northern Lights?" Until Syun-Ichi Akasofu and his graduate students at UAF’s Geophysical Institute figured out how to model the solar wind in the late 1970s, the answer was "Go as far north as you can and watch the sky at night."

Scientists had been trying for years to predict when the solar wind would interact with the Earth's magnetosphere to produce dancing lights in the sky, because such solar weather can have disruptive effects on radio, satellite and aircraft communications.

GI Director Juan Roederer later wrote that Akasofu "set out like a space-age Sherlock Holmes, with not one but several Watsons (his graduate students), on a systematic, patient, piecemeal search" for understanding of the solar wind. That search led to, among other things, the ability to predict the aurora. The Hakamada–Akasofu–Fry computer program used satellite data to model the form, velocity and direction of the solar wind as it came toward the Earth.

"By 1994 we were starting to use this model and making it available to other scientists," says Charles Deehr, GI professor emeritus and aurora forecaster. They decided to make the information public because of the number of people who called the institute daily during the winter to ask when the lights would be out. In the first years, Deehr generated a two-week extended forecast, updated weekly and faxed to 200 recipients around the country. With the advent of the internet, Deehr and his colleagues brought the forecast to a worldwide audience. Now the aurora forecast on the GI webpages is the most-visited website at UAF, garnering more than 2 million page views a year.