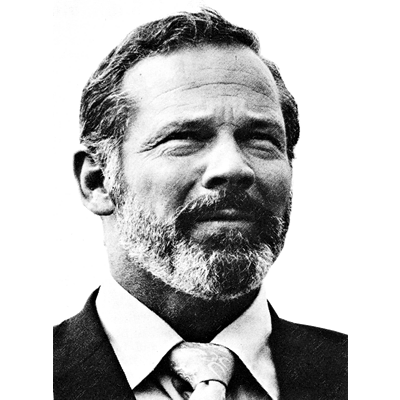 Jay Hammond found himself at the University of Alaska literally by accident. While working in Fairbanks, the muscular future governor of Alaska picked up a case of tar and fractured a vertebra.

“My options somewhat restricted, I decided to return to college,” Hammond wrote in his 1994 autobiography, “Tales of Alaska’s Bush Rat Governor.”

Because Hammond had spent two years at Penn State before his World War II service as a fighter pilot, the University of Alaska provided just a two-year diversion from his “Bush rat” lifestyle.

That lifestyle had already captured Hammond, and it dominated his public persona until his death in 2005 at 83. Hammond, who spent decades in politics, became a revered figure for his advocacy of the Alaska Permanent Fund and its annual dividend, both created during his governorship. But he always identified himself as a “reluctant politician” whose first love was Alaska’s rural outdoor lifestyle.

Hammond and his first wife came to Alaska after the war. He trapped near Rainy Pass while his wife worked in Anchorage. Finding the trapline unprofitable and needing treatment for his already troubled back, Hammond and his wife moved to Fairbanks in 1947.

After the tar case incident ended his employment at Fort Wainwright, Hammond and his wife bought property from UA President Charles Bunnell near the college and built a small house.

After graduating with a biology degree, he went to work as a pilot and hunter for the U.S. Fish and Wildlife Service, first in Anchorage then Dillingham. His first marriage ended, and a few years later he married Bella Gardiner of Dillingham. They homesteaded at Lake Clark in 1956.

Voters from the area elected Hammond to the Legislature in 1959, launching a political career that culminated as governor from 1974 to 1982.

During a 1978 election debate, the moderator asked Hammond whether he thought he was the best person for the governor’s job. No, many Alaskans could do better, Hammond replied. He paused and added, “Unfortunately, none of them are running.”