IN HER OWN WORDS: 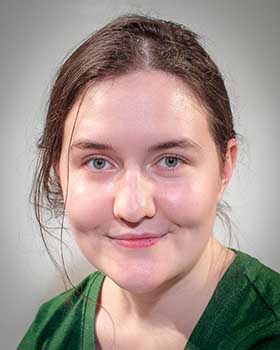 Where were you born and raised?
I’ve been in Alaska my whole life! I was born in Juneau, spent my early childhood in Dillingham, and moved to Anchorage for secondary school.

Why did you choose to study at UAF?
UAF is close to home, but far enough away that I can feel like a real, independent adult. Also, it has a stronger creative writing program than UAA, and those really were my only two options, considering the price of college these days.

When did you first decide to pursue a degree in FLPA/ Theatre Concentration?
I think I was already considering a major in Theatre when I came here, but Carrie convinced me to declare it my freshman year.

What first attracted you to theatre?
Ever since I moved to Anchorage, my mom and I were involved in community theatre. It’s a great way to socialize– the set-in stone hours are a godsend for someone that can get socially burned out really easily. It’s also a really fun way to practice emoting, since you don’t have to worry about coming up with the words yourself.

What experiences at UAF have contributed to your academic and artistic success?
Being in college productions has been really great, since acting is a lot like any other skill– it improves with practice. I also think the variety of productions put on by the university helps students experience a wide range of styles. I also really appreciate how patient and understanding the teachers here are, especially when the pandemic hit.

Do you have any advice for new FLPA students?
Like I said, acting is a skill! Like any skill, it improves with practice, and with paying attention to people who have already put in the time to master it. The reading may feel a little bit daunting at times, but it’s assigned for a reason.

Please tell me about your most influential theatre or film projects while at UAF.
My first year here, I was in Pink Violet, a student film directed by Keziah Anderson. It was the first time I’d been in a real film shoot (discounting my very low-effort-dystopian-short-film from high school), and it was a really big learning experience, since it turns out that stage acting and film acting are drastically different beasts. Pride and Prejudice, directed by Rebecca George, was also really different, because it was put on hold for a very long time due to the pandemic, and when we resumed it was all over Zoom.

Please tell me about your experience with Student Drama Association and Film Club.
SDA’s productions my freshman year were a really fun way to see what putting on a play entails behind the scenes. Film Club is also pretty fun, though film isn’t something I’m as familiar with. Whenever I do show up, there are always some really interesting discussions taking place.

What are your plans for after graduation?
I wish I had solid plans! Ideally, in the long term, I’d like to do something in the arts, maybe become a novelist, but in the short term I’m not really sure. I’ve been thinking about doing Peace Corps once I have my bachelor’s degree, so that I can continue putting off making life decisions.