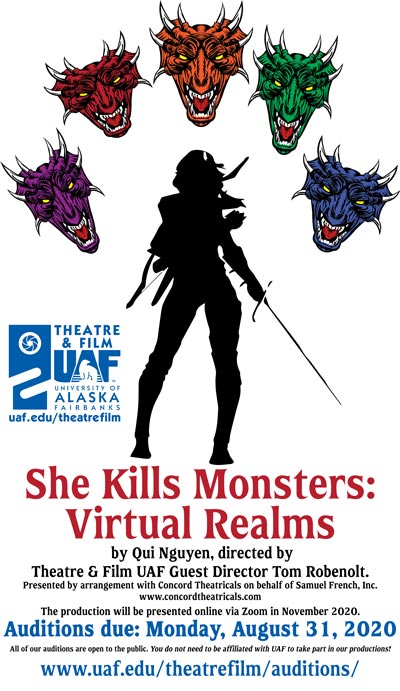 THE STORY: “She Kills Monsters tells the story of Agnes Evans as she leaves her childhood home in Ohio following the death of her teenage sister, Tilly. When Agnes finds Tilly’s Dungeons & Dragons notebook, however, she stumbles into a journey of discovery and action-packed adventure in the imaginary world that was Tilly’s refuge. In this high-octane dramatic comedy laden with homicidal fairies, nasty ogres, and 90s pop culture, acclaimed young playwright Qui Nguyen offers a heart-pounding homage to the geek and warrior within us all.” (concordtheatricals.com)

Please check out our Auditions  page for more information - and as always: Theatre UAF auditions are open to the public - so get your game on!

Pride and Prejudice based on the novel by Jane Austen 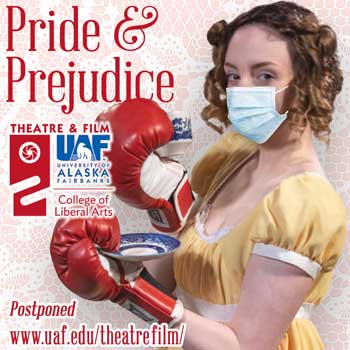 Theatre UAF presents Pride and Prejudice by Kate Hamill based on the novel by Jane Austen, directed by Rebecca George.

TICKETS: (if purchased ahead of time online)
$10 Students & Children
$20 Seniors/ Military/ UAF Faculty & Staff
$25 Adults
*an additional $2 at the door
Tickets are also available by calling the Box Office at 474-7751.

RATING:
This play is rated PG

It is a truth universally acknowledged, that a single man in possession of a good fortune, must be in want of a wife.

Pride and Prejudice by Jane Austen

“This isn’t your grandmother’s Austen! Bold, surprising, boisterous, and timely, this P&P for a new era explores the absurdities and thrills of finding your perfect (or imperfect) match in life. The outspoken Lizzy Bennet is determined to never marry, despite mounting pressure from society. But can she resist love, especially when that vaguely handsome, mildly amusing, and impossibly aggravating Mr. Darcy keeps popping up at every turn?! Literature’s greatest tale of latent love has never felt so theatrical, or so full of life than it does in this effervescent adaptation. Because what turns us into greater fools…than the high-stakes game of love?”

The design team consists of Film and Performance Arts major Cody Peters as the Sound Designer. "The process of designing the sound for the show continues to be fun, exciting, and fulfilling as I discover new ways to use sound to draw in the audience deeper into the world of Pride and Prejudice along with enhancing the wonderful talents of the actors and all the people behind the scenes who help to make an amazing show.". Theatre UAF Alum and Staff member Amanda Casterline is designing the costumes and Professor Kade Mendelowitz is designing the set and lights. 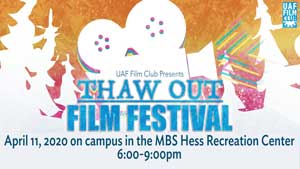 When? It will take place in the Hess Rec Center on the UAF campus - Saturday, April 11 @ 6pm.

Deadline to enter: Submissions are due in digital format by Wednesday April 1, 2020 at midnight. Must be a downloadable copy.

The Thaw Out Film Fest is an annual short film festival for works under 25 minutes. It is open to all filmmakers high school and up, local to international!

On the day of the festival there will be prizes and popcorn. All accepted films will be screened to an amazing audience along with a short director Q&A. Judges will evaluate the films and award hand-crafted trophies for Best Director, Best Cinematography, Best Score, and many more!