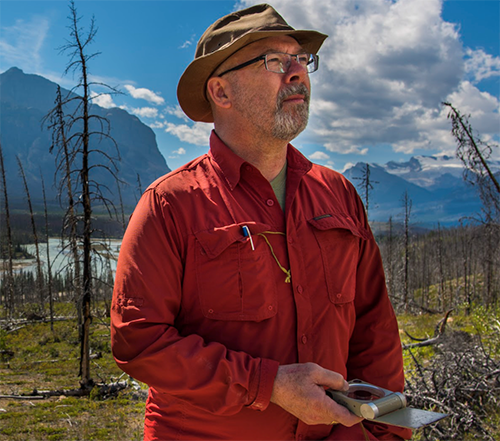 About:
My research is focused on understanding how Earth’s geography has changed over geological time, and determining the significance of Earth’s changing geography for the evolution of the biosphere and atmosphere. I study current and ancient mountain belts, as mountain systems develop along plate margins and provide a record of the long-term movements and plate interactions of continents.   Outreach is central to my science, for a public ignorant of the basic workings of the Earth and of the depth of Earth history, will never be able to imagine or comprehend the substantial challenge that ongoing climate change presents for humanity.

Abstract:
The mid-Cretaceous (120 to 90 Ma, hereafter mK) period presents us with an economically and tectonically significant puzzle when it comes to understanding Laurentia's geological evolution. It was during this time period that the bulk of Canada's oil and gas reserves were produced and sequestered, including the massive oil sand
deposits of northern Alberta. The mK also saw the deposition of much of the coal-bearing strata of BC and Alberta; the development of an enormous gold endowment in BC, Yukon and Alaska, including the Tintina Gold Belt; formation of the massive Cantung and MacTung tungsten deposits that lie right on the Yukon-NWT border; emplacement of gem-quality emerald deposits in the eastern Cordillera of Yukon and northern BC; perhaps the development or at least the remobilization of Mississippi Valley Pb-Zn deposits including the Pine Point body; and the eruption of a series of diamondiferous kimberlite pipes that together define a 4000 km long, N-S striking kimberlite corridor that runs down the very centre of the continent. Is there an underlying process or tectonic setting that explains the coeval development of this "mK Bonanza" of important economic mineral and energy deposits? The development of the kimberlite corridor points to E-W extension and lithospheric thinning of the continent. An overall extensional setting for the continent is consistent with the mK opening of the N Atlantic and the Canada basin, all as part of the coeval acceleration of Pangea breakup.
However, explaining the mK Bonanza as a product of continental extension runs contrary to most (all?) tectonic models. Why? Because of the Cordilleran Orogen. The orogen is characterized by mK fold & thrust belts including the Brooks Range of Alaska; the Selwyn- Columbian of Yukon-BC-Alberta; and the Sevier of the conterminous US. mK contraction is commonly explained as a result of an increase in the relative rate of convergence between North America and the Panthalassan oceanic slabs inferred to have been subducting beneath the continent's west margin. In this 'Accretionary' model, mK strata of Laurentia east of the Rocky Mountains are interpreted as a retro-arc foreland basin developed in response to compressive loading of the continental lithosphere. An alternative 'Westward Subduction' model may reconcile the Cordilleran record of arc magmatism and crustal shortening with lithospheric thinning of cratonic Laurentia. In this model subduction is beneath the east side of the Cordillera, not the west; there is no Panthalassan subduction zone; and the Cordillera and its thrust belts occupy the upper plate of a west-dipping subduction zone. Cratonic Laurentia, forming the lower plate, thins due to slab pull and is characterized by a ‘lower plate’ hydrocarbon bonanza. The Cordillera, forming the upper plate, is host to typical arc and arc-continent collisional mineral deposits. A suite of geological, geophysical and geodynamic studies focused on
mK strata can test if westward subduction of the continent is a viable model that reconciles shortening and thickening of Cordilleran lithosphere coeval with thinning of cratonic Laurentia, and explains the mK mineral and energy Bonanza.