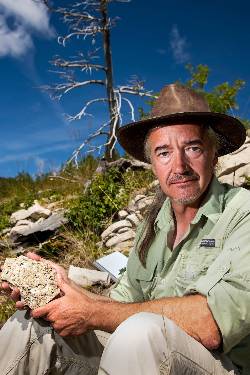 About:
Murray received his Diploma in Mechanical Engineering Technology from the Northern Alberta Institute of Technology in 1987, a BSc from the University of Alberta in 1995 and PhD from the University of Alberta in 1999. He has worked professionally in the hydrocarbon industry, at the Northern Alberta Institute of Technology, and as an Assistant Professor at the University of New Brunswick. Murray’s research focuses on using sedimentology and ichnology to interpret sedimentary rock successions. This broad field has strong links to the hydrocarbon industry, is used extensively in paleoclimatology, and is applied in modern sedimentary environments.

Abstract:
The McMurray Formation is one of the largest oilfields in the world. It is up to 120 m thick and is at least 180 km x 120 km in size. The reservoir is heterolithic and complex, and so detailed ichnology and sedimentology are used to resolve spatial aspects of the deposit with particular focus on predicting the presence of sand reservoir.
The ichnology (or trace fossil analysis) indicates that much of the McMurray Formation was deposited under conditions of brackish water, although some parts of the McMurray were clearly deposited in fresh water and others in nearly marine conditions. Sedimentologically, the McMurray is dominated by sandstones and siltstones and in some areas good evidence for tidal reworking is present. Broadly speaking, large fluvial and estuary channels comprise much of the stratigraphy, which is thereby complicated. This presentation will review the ichnological and sedimentological bases used to constrain the stratigraphic framework and depositional environments of the McMurray Formation in Alberta, Canada.