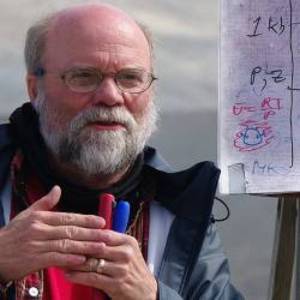 About:
John Eichelberger received his education in geology and igneous petrology at MIT and Stanford University. He is perhaps best known for scientific contributions in understanding magma mixing and degassing. John’s career spans research laboratories, academia, and the U.S. Government. He has long had a passion for drilling and international cooperation, both of which are required to explore the frontier beneath our feet. In 2015, John received the Soloviev Medal in Natural Hazards from the European Geosciences Union. This academic year he is one of two Distinguished Lecturers chosen by the Geological Society of America to excite and inform the research community about Continental Scientific Drilling.

Abstract:
Many questions about how magma is stored in the crust, evolves, and drives hydrothermal convection could be answered by drilling the transition from hydrothermal to magmatic regimes and sampling magma in situ. Although this may seem impossible, it has already happened by accident during geothermal development in Africa, Hawaii, and Iceland. I will review the quest for magma: what we have learned from coring lava lakes as a proxy for magma chambers, what we can glean from the accidental drilling encounters with magma, and what is planned for an international magma observatory, Krafla Magma Testbed, in Iceland. The benefits of direct observation of the magmatic environment lie in understanding how planetary silicate crust evolves, as well as leaps forward in productivity in geothermal energy and reliability of eruption forecasts.