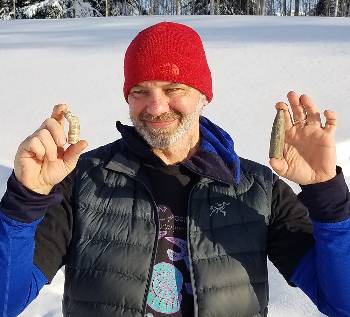 About:
Jochen Mezger is the Field Camp director at UAF’s Department of Geosciences. He is a structural and metamorphic geologist by training and conviction, and has spent many summers in the southwestern Yukon Territory, the Highlands of Sri Lanka and his favorite mountain range, the Pyrenees. He loves Alaska and his Geology Field Camp, but secretly wishes that the rocks he takes his students to map would be stronger deformed. He was very excited to one day find deformed belemnite rostra during Field Camp in the Talkeetna Mountains that reminded him of ductile deformation his beloved schists and mylonites enjoy. He realized that microtectonics and paleontology are not necessarily mutually exclusive.

Abstract:
Deformed fossils provide valuable information about deformation of rocks in the uppermost crust. Since their     original shape is known, the distortion of the shell allows us to reconstruct the amount of strain the fossils have endured. These fossils include ammonites, trilobites, brachiopods and belemnites, common in Paleozoic and Mesozoic marine sediments. Lower Cretaceous sediments in the Talkeetna Mountains of eastern Central Alaska contain abundant belemnite rostra, the rod-shaped internal skeleton of a squid-like marine creature, that show 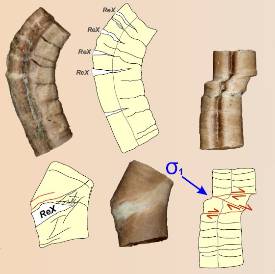 signs of plastic deformation, e.g. they are bent or sheared, indicative of compression. Thin sections reveal calcite veins serve as a “glue” to hold the deformed fossil together. Microstructural, cathodoluminescence and fluorescence studies show that the deformation occurred after the death and burial of the animal. The sedimentary layer in which the deformed fossils were found is located along a reverse or thrust fault. The deformation can be linked to the activity of the fault. The microstructures provide information on the temperature and pressure that were prevalent when the fault was active. Thus, bent out of shape, the deformed belemnites help to understand the tectonic activity in the Talkeetna Mountains a little bit better.