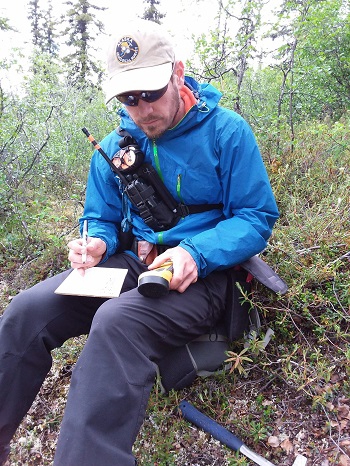 Abstract
The Yukon Tanana Terrane (YTT) in Yukon and eastern Alaska was accreted to North America in the late Paleozoic to early Mesozoic and is interpreted as an internally deformed, fault-bound panel above slope-basin metasedimentary rocks of parautochthonous North America (pNA). Detrital zircon data suggest that YTT and pNA units share a common pre-Devonian history. This shared history, along with similar protoliths, similar metamorphic grade, and generally poor exposure, make mapping the terrane boundary difficult. Differences in K/Ar and 40Ar/39Ar ages in the two terranes have been recognized for 20 years and thermochronology data in Yukon has been used to identify domains with characteristic cooling ages, leading to more detailed understanding of the exhumation history of the YTT during and after terrane accretion. The Alaska Division of Geological & Geophysical Surveys (DGGS) Mineral Resources section is interpreting the exhumation history of YTT and pNA rocks in eastern Alaska with additional DGGS and USGS 40Ar/39Ar thermochronology and recent geologic mapping. The 40Ar/39Ar cooling ages of amphibolite-grade metamorphic rocks in the NE Tanacross and SW Eagle quadrangles suggest the Fortymile River assemblage shares an Early Jurassic exhumation event with other YTT assemblages in Yukon. The Lake George assemblage in the same area was uniformly uplifted in the mid-Cretaceous. The boundary between these terranes is an extensional detachment. Mid-Cretaceous 40Ar/39Ar ages in the hanging wall suggest that the shear zone extended multiple kilometers into the Fortymile River assemblage, resulting in the reset of 40Ar/39Ar ages near the detachment. Anomalous Late Jurassic to Early Cretaceous 40Ar/39Ar cooling ages at moderate structural distances above the detachment may indicate a fossil partial retention zone for argon in biotite and white mica is now exposed at the surface due to tilting during mid-Cretaceous extension. Similar 40Ar/39Ar cooling age patterns may exist above extensional detachments in Yukon. In the Ladue River area of the Tanacross Quadrangle, correlation of the Ladue River unit with other assemblages in the YTT has been problematic and Triassic 40Ar/39Ar cooling ages suggest the Ladue River unit was exhumed earlier than other parts of the YTT in western Yukon and eastern Alaska. This raises further questions about the nature of poorly exposed contacts with the Klondike assemblage, which has Jurassic 40Ar/39Ar cooling ages, and with the parautochthonous Lake George assemblage.