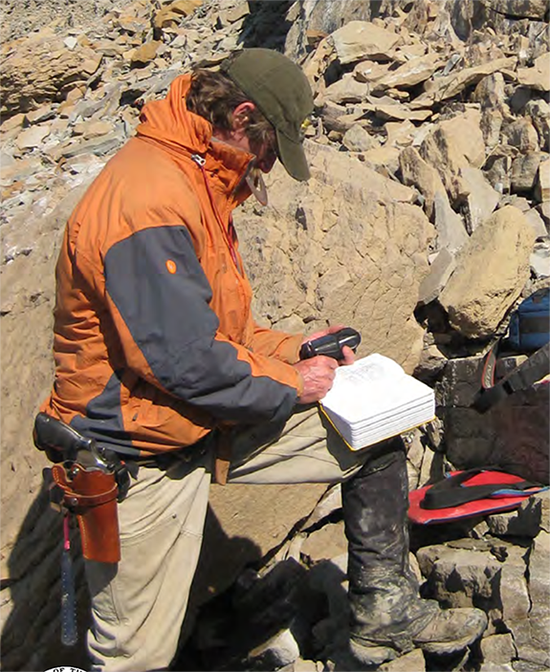 About:
Bob Gillis is a field geologist who integrates geologic mapping, structural geology and thermochronology to reconstruct the tectonic history of Alaska’s hydrocarbon basins. He received a BS in geology at the University of Arizona and a MS in geology at UCLA where he studied the deformation and exhumation history of the Bolivian central Andes.
Abstract:
Forearcs at convergent plate margins are dynamic systems that develop in response to boundary conditions that commonly vary over space and time. However, much of the geologic and geophysical record (the oceanic plate) is lost to subduction. Therefore, deciphering the often complex and incomplete geologic history preserved in ancient forearc systems is critical to understanding a variety of subduction processes that shape mature subduction systems. The Alaska forearc is exposed for approximately 1,200 km from the southern tip of the Alaska Peninsula to the Talkeetna Mountains/Matanuska Valley and preserves an approximately 200 m.y. record of episodic magmatism and forearc basin subsidence, thereby providing reasonable length and longevity for documenting spatial and temporal geologic variability. The magmatic and depositional record indicates two major disruptions of the forearc system in the Early Cretaceous and Paleogene. Both are marked by a cessation of arc magmatism and regional unconformities extending the entire length of the forearc basin. However, geologic mapping and subsurface geophysical datasets indicate that the forearc records mostly Cenozoic deformation whose style varies spatially along the length of the forearc. The Alaska Peninsula segment of the forearc may have been subjected to low magnitude shortening as late as the Paleocene but was subsequently deformed by dextral transtension beginning in early Eocene into the Miocene as it transitioned from a forearc to backarc setting. The middle segment of the forearc from the upper Alaska Peninsula to near the position of Redoubt Volcano was principally contractional and/or transpressional at the arc/forearc domain boundary marked by the Bruin Bay fault from as early as Late Jurassic until perhaps late Eocene, after which deformation migrated into the forearc basin. In upper Cook Inlet and Matanuska Valley areas, deformation is dominated by late Paleocene to late Eocene dextral transtension at the arc/forearc basin boundary and margin-parallel extension of the arc domain, followed by transpressional reactivation of extensional and transtensional structures after the Oligocene. Considered together, backarc extension of the southwestern segment of the forearc and forearc extension near the northeastern terminus facilitated by dextral strike-slip faults is inferred to have resulted in Paleogene counterclockwise rotation of the forearc. Low-temperature thermochronologic results from samples collected along the structural boundary between arc and forearc basin domains define periods of bedrock cooling that overlap with or post-date magmatic hiati and unconformity development. However, unlike the magmatic and sedimentary records that remain broadly uniform across the forearc, cooling ages that are not tied to local magmatic re-heating generally fall within two distinct domains whose boundary corresponds to the transition from contraction to margin-parallel extension and dextral transtension in the northeastern segment of the forearc. Cooling ages to the southwest of this area typically define middle Cretaceous exhumation cooling, whereas to the northeast, cooling ages are nearly all Paleogene and likely reflect exhumation during high heat flow conditions. The latter domain is restricted to the hinge of the Alaska orocline where structurally-controlled near-trench igneous rocks intrude or erupt into the forearc basin are of similar same age to cooling.  Cooling of the northeastern forearc, the regional forearc unconformity, and arc hiatus in the Paleogene are commonly ascribed to a ridge subduction event that swept from west to east along the Alaska forearc from c. 60 Ma to ca. 50 Ma, as recorded by a well-defined array of near-trench plutons that intrude the accretionary prism outboard of the forearc basin. The subducting ridge would have ephemerally uplifted the forearc, disrupted the mantle wedge, and heated the base of the crust as it passed underneath. However, a time-transgressive character is not reflected in bedrock cooling, re-initiation of forearc basin sedimentation, cessation/re-initiation of arc magmatism, or timing and style of deformation along the approximately 1,200 km length of the forearc, suggesting the prism arrived outboard of the Alaska forearc after the ridge had passed. Instead, synchronous extension at opposite ends of a forearc strengthened by a spine of intrusive rocks is mechanically consistent with rigid beam rotation, and coeval structurally-controlled magmatism localized in the axis of the orocline conforms with models of extension in its hinge region during late Paleocene to late Eocene buckling of Alaska.