Our goal is to heighten awareness of the problems associated with non-native invasive species and to bring about greater statewide coordination, cooperation and action to halt the introduction and spread of these invasive species.

If action is taken Alaska may be able to avoid the negative economic and ecological impacts associated with invasive pests. The most cost-effective option for dealing with invasive pests involves detecting species as they are becoming established and responding rapidly to their presence. To achieve this, interested citizens and participating agencies must work collaboratively to eliminate the threat of invasive species in Alaska.

Invasive species have many characteristics that allow them to dominate native ecosystems. Invasive plant species grow rapidly, mature early and are able to reproduce both sexually and vegetatively. These factors, along with many others, enable invasive species to out-compete native and desirable species. Entire ecosystems can be altered as invasive species take over.

The negative impacts associated with invasive species are not limited to terrestrial systems. Wetlands and waterways are particularly sensitive to invasion. Aquatic invasive plants can alter water pH, turbidity and light availability, thus damaging fish habitat and impeding fish migration. Aquatic invasive plants can also choke waterways, restricting recreational and transportation corridors. Other aquatic invasive species such as invasive fish compete for food with native species, may prey on native species, introduce diseases, or have other deleterious impacts to the ecosystem.

Working collaboratively on invasive species management, we hope to avoid these negative impacts in Alaska.

AISP is an informal group comprised of individuals representing agencies and organizations statewide. Committee membership is based on interest, availability for meetings and willingness to work toward the goals of the committee. There are no formal membership requirements; anyone statewide may participate. To sign up for the AISP listserv, click here.
This listserv provides updates on information regarding invasive plant issues statewide. The AISP group meets monthly via telephone conferencing; the call-in number for the monthly meeting is emailed to members of the listserv. You can also find us on Facebook at the Alaska Invasive Species Partnership.

Alaska’s diverse environmental, cultural, and economic resources are free from the impacts of invasive species.

Provide statewide leadership in the prevention and reduction of the impacts from invasive species in Alaska. We will accomplish this through facilitating and fostering awareness and collaboration among the public, indigenous groups, industry, researchers, elected officials, governmental agencies, and non-governmental organizations. We will accomplish this by: 1) providing forums for the exchange of scientific and technical information; 2) coordinating awareness campaigns; and 3) providing credible unbiased scientific information to inform management decisions at all levels of government. Our efforts will provide leadership, support, and encouragement for the implementation of effective prevention, early detection, and management of invasive species across Alaska. 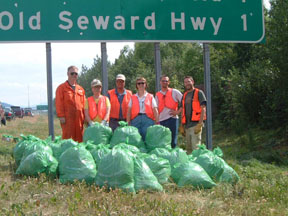 On June 15, 2000, groups were invited by the UAF Cooperative Extension Service to meet and look for solutions for controlling noxious and invasive plants in Interior Alaska. After sharing what had been done, the group agreed that an Interior statewide effort was needed and decided to establish the statewide Alaska Committee for Noxious and Invasive Plants Management (CNIPM). In 2017 CNIPM changed its name to Committee for Noxious and Invasive Pests Management to reflect the ongoing collaboration across taxa. In 2018 CNIPM changed its name once again to the Alaska Invasive Species Partnership (AISP).

The purpose of AISP is to work for the statewide management of noxious and invasive pests in Alaska.

A Memorandum of Understanding (MOU) was developed to establish CNIPM and to secure agency and organizational support. Representatives of both private and public sectors have submitted letters of endorsement and MOU signatures. The list of signatories is quite broad. With the change in name, and the date the MOU originated it is considered time to update the MOU and signatories.  Look for this to happen in the near future.