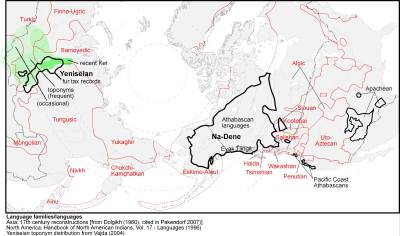 The Dene-Yeniseian Hypothesis proposes a genetic relationship between the Na-Dene (or Athabascan-Eyak-Tlingit) languages of North America and the Yeniseian languages of Central Siberia.

Edward J. Vajda of Western Washington University developed this hypothesis between 2006 and 2010. In contrast to previous proposals that link Na-Dene with languages of the Old World, Vajda's hypothesis is based on the identification of systematic parallels between Proto-Na-Dene and Yeniseian languages -- a comparison made possible by recent advances in the historical reconstruction of Na-Dene (or AET) languages.

The D-Y hypothesis was publicly examined at a February 2008 symposium in Fairbanks and Anchorage and was favorably received by a number of prominent experts in Na-Dene languages and historical linguistics.

Dene-Yeniseian journal, republished as a book, is available at ANLC 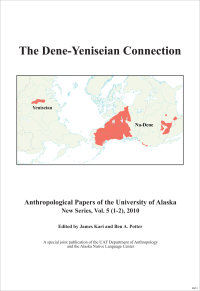 The current issue (Volume 5, New Series) of the Anthropological Papers of the University of Alaska is titled “The Dene-Yeniseian Connection.” It has been republished as a soft-cover book, with corrections, by the Alaska Native Language Center.

This 369-page APUA volume contains the 18 papers from the Feb. 26-29, 2008, symposium in Alaska plus several contributed papers. The editors are James Kari and Ben Potter.

The 67-page lead article by Edward J. Vajda (Western Washington University) presents extensive evidence for Dene-Yeniseian. Accompanying his paper are primary data on Na-Dene historical phonology by Jeff Leer, along with critiques by several linguistic specialists and articles on a range of topics (archaeology, prehistory, ethnogeography, genetics, kinship, folklore) by experts in these fields.

To buy "The Dene-Yeniseian Connection," click here to go to the ANLC Publication Store.  Bookseller inquiries are welcome.The ISBN is 978-0-615-43296-0.

(Note: Vajda’s earlier article “A Siberian Link with Na-Dene Languages” is no longer available in draft form at this website. The revised version appears in the new book.)

Vajda presents evidence for an ancient Dene-Yenisiean possessive connector prefix (possibly *ŋ) that appears in idiosyncratic ways in Dene (or Athabaskan), Eyak, Tlingit, and Yeniseian nouns, postpositions, directionals, and demonstratives. Vajda also suggests one new lexical cognate: PA directional *ñəs-d ‘ahead’, ‘out on open water’ and Yeniseian root *es ‘open space’. In terms of the sections within Vajda's 2010 paper, this 2013 article can be read as an addition to his §2 (which ends on p. 63).

ANLC hosted a workshop on the Dene-Yeniseian hypothesis on March 24, 2012.

During the workshop, Ed Vajda presented a public lecture, The Peopling of the Americas and the Dene-Yeniseian Connection. This is the abstract:

Data from archaeology, human genetics, and linguistics are providing a clearer understanding of how the American continents were first colonized by peoples from Siberia and Asia’s Pacific Rim. Archeological remains, along with patterns in the distribution of human DNA, reveal much about the first peopling of the Americas. Historical-comparative language studies can add a third perspective. While most languages spoken in North Asia today were brought northward by pastoral peoples relatively recently and show no connection to those spoken in the Americas, the Ket language, spoken by a small group of forest hunters in the Yenisei River area of central Siberia, is related to North America's Tlingit, Eyak, and Athabaskan languages -- a family called Na-Dene. Evidence includes systematic correspondences in consonants, vowels, and tones, as well as parallel verb structure. The presentation discusses the role of linguistic fieldwork in uncovering this link and emphasizes what the comparison adds to our understanding of prehistoric migrations across the Bering Strait region.