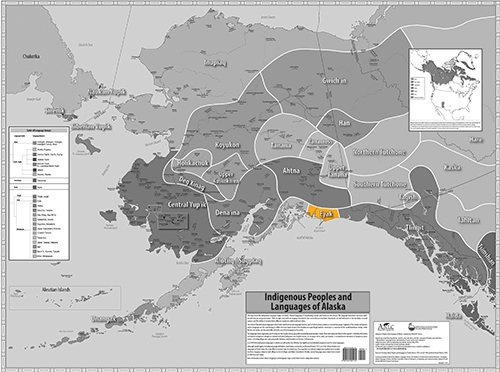 Eyak is not an Athabascan language, but a coordinate sub-branch to Athabascan as a whole in the Athabascan-Eyak branch of the Athabascan-Eyak-Tlingit language family.
Eyak was spoken in the 19th century from Yakutat along the southcentral Alaska coast to Eyak at the Copper River delta, but by the 20th century only at Eyak. It is now represented by about 50 people but no surviving fluent speakers. The last remaining native speaker of Eyak died in 2008.

Comprehensive documentation of Eyak has been carried out since the 1960s by Michael Krauss, including his edition of traditional stories, historic accounts, and poetic compositions by Anna Nelson Harry.