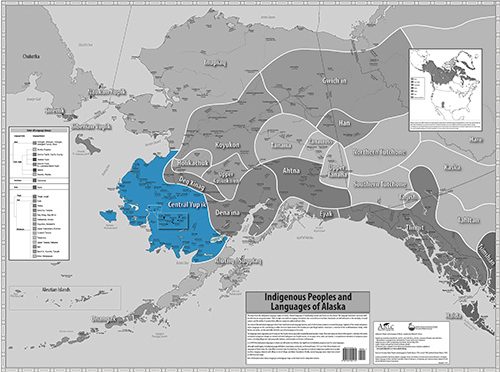 Central Alaskan Yup'ik is the largest of the state's Native languages, both in the size of its population and the number of speakers.

Of a total population of about 21,000 people, about 10,000 are speakers of the language. Children still grow up speaking Yup'ik as their first language in 17 of 68 Yup'ik villages, those mainly located on the lower Kuskokwim River, on Nelson Island, and along the coast between the Kuskokwim River and Nelson Island. The main dialect is General Central Yup'ik, and the other four dialects are Norton Sound, Hooper Bay-Chevak, Nunivak, and Egegik.

The use of the apostrophe in Central Alaskan Yup'ik, as opposed to Siberian Yupik, denotes a long p. The word Yup'ik represents not only the language but also the name for the people themselves yuk 'person' plus pik 'real'.  In Chevak the language is referred to as Cup'ik, and in Nunivak as Cup'ig, words that are also used in place of Yup'ik to denote a person of this group.

Early linguistic work in Central Yup'ik was done primarily by Russian Orthodox, then Jesuit Catholic and Moravian missionaries, leading to a modest tradition of literacy used in letter writing. In the 1960s, Irene Reed and others at the University of Alaska in Fairbanks developed a modern writing system for the language, and their work led to the establishment of the state's first school bilingual programs in four Yup'ik villages in the early 1970s.

Since then a wide variety of bilingual materials has been published, as well as Steven Jacobson's comprehensive dictionary of the language and his complete practical classroom grammar, and story collections and narratives by many others, including a novel by Anna Jacobson.

Central Yup'ik is the Alaska language spoken by the greatest number of people--about 15,000. The Central Yup'ik people live on the western central coast of Alaska around Norton Sound and Bristol Bay, and inland some distance along the rivers of the area.