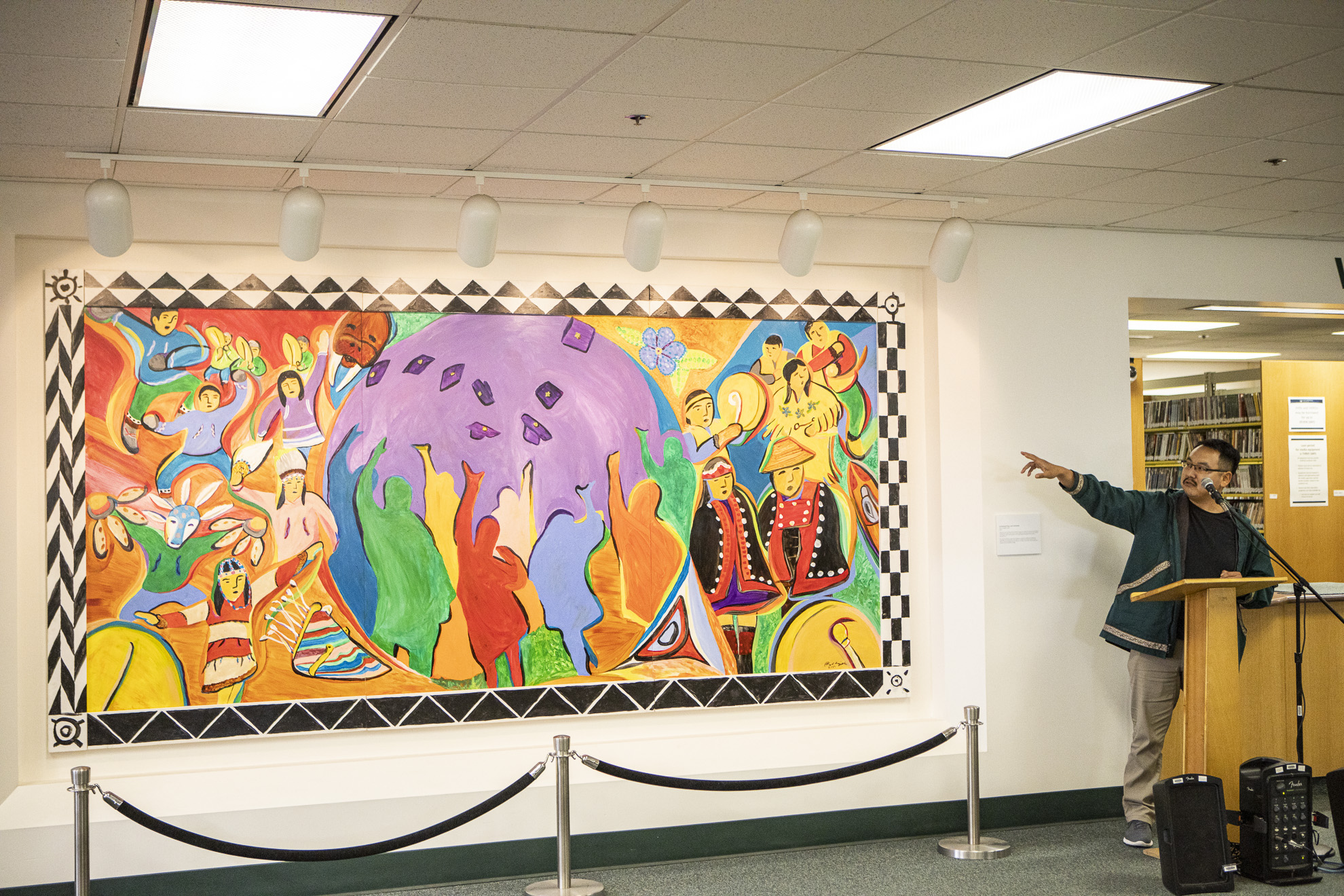 Percy Avugiak attributes his successes as a first-generation college graduate to the support he received while he was a student at the University of Alaska Fairbanks. Specifically, to the Rural Student Services program.

“They made UAF feel very much like a home away from home,” he said. “RSS was a place where I got to meet new people and share stories. I learned a lot about other cultures, enjoyed potlucks and ate traditional foods.”

Avugiak also learned about the Inu-Yupiaq Dance Group through the program. For him, it was a daily connection to home. They shared songs, stories and dances, and traveled to many places throughout Alaska.

That is the theme of a new mural on the UAF campus, “Invitation Dance and Celebrations.” The artwork by Avugiak has been on display at the west entrance of UAF’s Rasmuson Library since it was revealed in September 2019.

Avugiak’s work tells a story. The artist used vibrant colors to convey a message about strength, progress and passion. The image depicts dancers wearing traditional Alaska Native clothing surrounding colorful graduates dressed in cap and gown. The graduates appear to be at commencement and are tossing their hats in the air, celebrating their achievement of completing their college degrees.

The painting conveys how connected Avugiak is to both UAF and his Alaska Native roots. Avugiak earned his Bachelor of Fine Arts degree from UAF in 2006. Originally from Chefornak, Alaska, he is both Yup’ik and Inupiaq, as his mother is from White Mountain.

Avugiak originally found inspiration through studying other artists’ work. He was lucky to have some of his idols become mentors. One instructor shared his passion for painting. Originally from Kodiak, Alvin Amason is a well-known painter and sculptor whose works are displayed all over the country. During Avugiak’s studies at UAF, Amason was head of the Alaska Native Arts program.

Another artist who inspired Avugiak is David Mollett, a professor of drawing and painting who owns the Well Street Art Company in Fairbanks. “I remember Percy Avugiak well from his undergraduate days. He stood out immediately in his first drawing and painting classes as a student with a keen interest in learning and expanding his artistic horizons. I have been pleased to follow his career and am proud of the fact that he has become a true professional artist.” 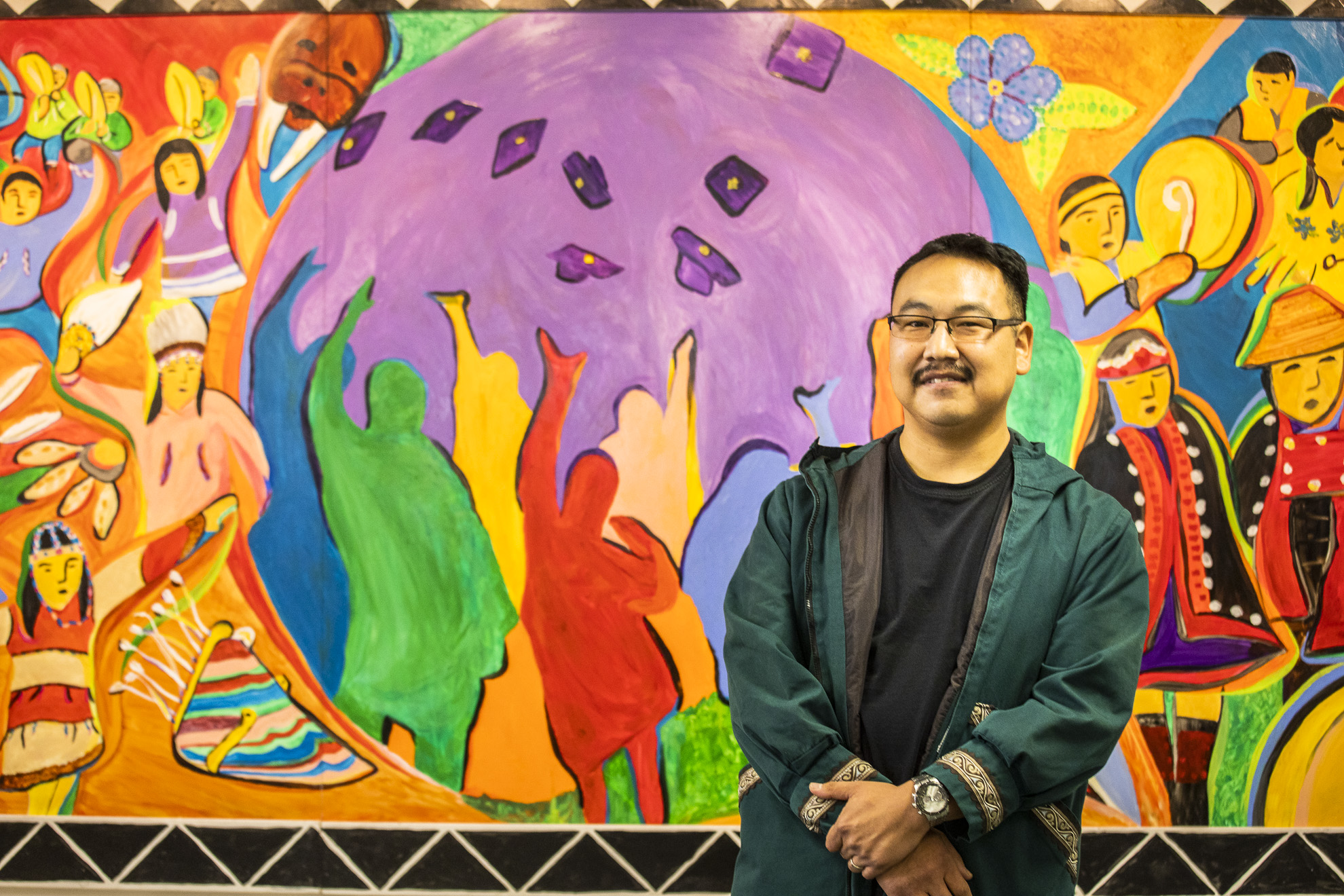 After graduation, Avugiak was working to establish himself as an artist when he found himself facing economic hardships during the financial crisis of 2007. He thought about doing something other than art to support his family, but in the end, he combined patience with a powerful work ethic.

“I thought of going back to school to look into other career paths,” he said. “Having a young small family, I knew I needed to try to keep going and just push myself as an artist. I did whatever I could to make myself stand out and kept making art. When the financial crisis passed, everything slowly got better for me.”

One of his first goals after graduation was to earn a public art commission. It may have taken a decade to achieve, but he was proud to be chosen to paint the massive mural in the Bethel Youth Corrections Facility. Soon after, he was chosen to paint an entire hallway in the state office building in Nome. All along he applied to participate in the 1% for Art program.

The term “1% for Art” refers to funding provided by state governments for public art installations, such as sculpture and murals, where a portion of the cost of public projects is reserved for art. For Avugiak, this term represented his drive to accomplish an especially unique goal.

When the opportunity to create a mural for the Rasmuson Library arose, he felt like his years of patience were paying off. “I finally found something I truly can do that was totally possible. I never gave up on my passion, to be successful in the field of art.”

Avugiak’s philosophy is simple. It is obvious to anyone who knows him how important family and community are. Although he left his home to attend UAF and gain education and experience, he is still deeply connected to his Inupiaq and Yup’ik roots.

“Growing up in a small village and around Native communities, many of us were told to help one another and listen to our parents and elders,” he said. “It is common to hear about the importance of knowing your family and friends. And that when you meet new relatives, it is good to take them in and get to know them because you never know when you may need them.”